From the Archives: The Real "First Thanksgiving" 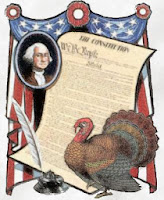 We all know the story of the "Pilgrims and Indians" celebrating the "First Thanksgiving." First in the "New World" it may have been, but it was not the first United States Thanksgiving. Brother George Washington proclaimed that first official Thanksgiving celebration in 1789, when he declared November 26 to be set aside not to be thankful for the nation's bounty but to give thanks for the newly adopted Constitution. Washington also enjoined people to "...unite in most humbly offering our prayers and supplications... beseeching [God] to pardon our national and other transgressions.” Although celebrated off-and-on, usually unofficially, from that time forward, Thanksgiving did not become a permanent official US holiday until Brother Franklin D. Roosevelt proclaimed it so in 1939.

Steve Harrison, 33° KCCH, is a Past Master of Liberty Lodge #31, Liberty, Missouri. He is the editor of the Missouri Freemason magazine, author of the book Freemasonry Crosses the Mississippi, a Fellow of the Missouri Lodge of Research and also its Senior Warden. He is a dual member of Kearney Lodge #311, St. Joseph Missouri Valley of the Scottish Rite, Liberty York Rite, Moila Shrine and is a member of the DeMolay Legion of Honor.