From the archives: Black Friday - A Chance to Exercise the Art 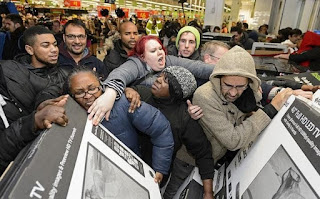 Amidst the debates on whether or not stores and businesses should close for the Thanksgiving holiday, there are those underlying thoughts about the day after Thanksgiving -- Black Friday. Black Friday is a day for retailers nation wide, to throw open their doors and deliver savings so big, so amazing, so insane, that the public will be motivated to get up and go to those retailers at 12:01 am.

The days following Black Friday seemed to echo the sombre and sickening pathos normally attributed to that shroud, that color we typify with the color Black. We watch news clips on television, YouTube and cell phone videos of human beings, reverting to ferocious animal states as they battle one another over monetary savings.

Kids trampled to death, men and women alike suffocating in the thick of herds of what can now only be some distant cousin, some untamed, ungoverned, rapacious beast. But alas, it is us. It is human, although unrecognizable.

This year, stores did close and then decided to stave of some of the anarchy by opening later in the evening on Thanksgiving. I decided that for the first time since the last and only other time I had gone Black Friday Shopping, to go out to see what I could see. 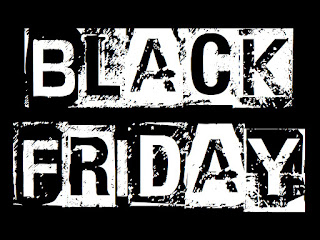 What I saw did not disappoint. I don't mean that in any way to suggest I was looking for disorder, rather, I was hoping to see people being people. People caring and being courteous. Amid the sea of winter coats and red Starbucks cups, were the voices of happy people, saying "Excuse me", and complementing each other and of course, complaining about the long lines.

The moral fabric of humanity is a weave of altruistic principals, something we practice as Freemasons. It is something we are charged to do. To be courteous, kind, friendly, humble, to be the example. In the coming weeks we will be tried, Brethren. We will be taken to the edge and back again. Our patience, our affability will be put in the spot light. Use the stresses of the season to exercise our art of Friendship, Morality and Brotherly Love.

I know it can be hard, but the stakes are as high as they've ever been, and the world is watching. Be Freemasons.

Bro. Robert Johnson, PM is the Managing Editor of the Midnight Freemasons blog. He is a Freemason out of the 1st N.E. District of Illinois. He currently serves as the Secretary of Waukegan Lodge No. 78 where he is a Past Master. He also serves as the District Deputy for the 1st N.E. District of Illinois. Brother Johnson currently produces and hosts weekly Podcasts (internet radio programs) Whence Came You? & Masonic Radio Theatre which focus on topics relating to Freemasonry. He is also a co-host of The Masonic Roundtable, a Masonic talk show. He is a husband and father of four, works full time in the executive medical industry and is also an avid home brewer. He is currently working on a book of Masonic essays and one on Occult Anatomy to be released soon.