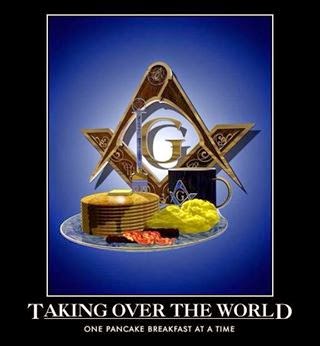 It is no secret that we Freemasons love our pancake breakfasts.  There are a score of pancake   (That and fish fries, but I have yet to visit a lodge having a fish fry dinner.) breakfast related memes on the internet and it is a very common joke amongst masons.

I often get a kick out of pancake breakfasts being put on by lodges (My Lodge does two a year, like clockwork, and other nearby lodges do them once a month to once a week!) because I have always been amused by stereotypes, specifically when people fulfill them.  The stereotype of the Freemason – putting aside the “We secretly rule the world to place the population in service to our Reptoid overlords” conspiracy junk – is a bunch of old men washing dishes after a pancake breakfast.

At my Lodge, we have a fairly old gas stove/oven.  I'd call it ancient but I wouldn't want to offend any members of the lodge who remember when it was brand new.  My job since becoming a Freemason has been to heat up the sausage that we serve with our pancakes.  Of all the jobs, I prefer this one, as it lets me work without moving about all morning, and I can have a quick moment to say hello to guests without having an option to engage in idle chitchat. (I am an introvert who likes the concept of people far more than the finished product.)  So I feed into the stereotype, and enjoy it quite a bit.

I should remark, I don't enjoy it at all while I am doing it.  I get there insanely early, having to get up even earlier to make the half hour drive to lodge, then sit in front of a hot oven, making myself smell of sausage and sweat, for a few hours, then I help clean up.  But what I enjoy, and what makes it worth it, is talking to the folks of my lodge without being in the formal meeting setting.  Even more, listening to the members talk to one another freely, not bound by the restrictions of the official meetings. (For those non-masons, there are certain topics that we are forbidden to discuss during open lodge meetings).

A second thing that is no secret is that pancakes are generally round whereas waffles can be square.  (I'll give you a moment to recover from that revelation).   In Masonry, the circle is a representation of the person's mind or soul, whereas the square is a representation of the body or the physical world.  I have sometimes wondered why we don't offer waffles, not just for the symbolism, but also because I prefer them to pancakes.  Waffles hold syrup better, plus they are much easier surfaces for the spreading of peanut butter. (Don't knock it until you've tried it.)  Now, I would wager that 100% of the reason for waffles not making an appearance is that we don't have a waffle-maker, but the symbol-loving part of me finds it interesting that I eat round pancakes at an even that my body dislikes but my mind and soul enjoy.

Brother Tech is the author of A Christian's Perspective on Masonic Symbols: The Square and Compasses. He is an active member in the craft, loves motorcycles and prefers to remain anonymous.