Corn – An Emblem of Nourishment 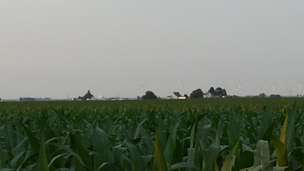 We learn in the second degree about the wages of a Fellowcraft in the middle chamber lecture; corn, wine and oil.   But what do you really know about corn and why was it chosen as one of the wages?  Having grown up on a farm and still living there today, I thought I knew everything about corn, but I hadn’t considered the meaning of it in a masonic context.

Corn has many different meanings in history, depending upon which country you are from.  An Iowa State University history of corn stated:

“Corn in the United States is also called maize or Indian corn. In some countries, corn means the leading crop grown in a certain district. Corn in England means wheat; in Scotland and Ireland, it refers to oats. Corn mentioned in the Bible probably refers to wheat or barley.”
Today corn is the most abundant crop grown in the United States with the US Department of Agriculture (USDA), estimating in 2014 that 14.216 billion bushels were produced.  But what do we do with all this corn?  Food of course is the most common usage, including livestock feed, cooking oil, baking products and candies.  Corn is also utilized in a number of industrial products such as ethanol, plastics, soap, antibiotics, aspirin and paper products.

But why corn as a wage in Freemasonry?  According to the 1869 Mackey Encyclopedia:
“Hence, as an element of consecration, corn is intended to remind us of those temporal blessings of life and health, and comfortable support, which we derive from the Giver of all good, and to merit which we should strive, with clean hands and a pure heart, to erect on the corner-stone of our initiation a spiritual temple, which shall be adorned with the beauty of holiness.”
Being symbolic of nourishment or food, I also consider corn emblematic of those times that we can dine together as brethren.  By doing so, we have the opportunity to learn from one another, share concerns and enjoy the fellowship of brotherhood.

So as Masons we have an obligation to nourish ourselves by studying and learning, spending time with our brethren and giving thanks for the many blessings we have.

~GJK
WB Gregory J. Knott is the Past Master of St. Joseph Lodge No. 970 in St. Joseph (IL) and a plural member of Ogden Lodge No. 754 (IL), Homer Lodge No. 199 (IL) and Naval Lodge No. 4 in Washington, DC.  He’s a member of the Scottish Rite, the York Rite, Eastern Star and is the Charter Secretary of the Illini High Twelve Club No. 768 in Champaign-Urbana.  He is also a member of ANSAR Shrine (IL) and the Eastern Illinois Council No. 356 Allied Masonic Degrees.  Greg serves on the Board of Directors of The Masonic Society and is a member of the Scottish Rite Research Society and The Philathes Society.  Greg is very involved in Boy Scouts—an Eagle Scout himself, he is a member of the National Association of Masonic Scouters.