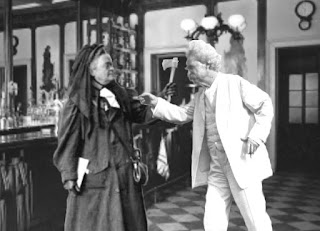 The bar was a magnificent stream of mahogany extending the width of the room. Behind it, a gold-embossed mirror reflected a piano player. He thrashed around the keys, pumping out a new ragtime tune — not so loud as to drown out the constant din and not so well as to make it recognizable.  To his right, six men played poker at a table beneath a picture of a reclining, half naked, painted woman imagined to be of dubious moral character.  Other women, more fully clothed, no less painted and of moral character unknown, circulated through the room encouraging men to order another drink.

There were a few Freemasons in the crowd, even in this obscure saloon in western Missouri... or maybe it was eastern Kansas.  Most in the crowded room hadn't given that much thought and most weren't sober enough to care.  Drunk or sober, however, the Masons, along with everyone else in the crowd, were certainly aware of the presence of a very famous Brother that evening.

In the back of the room, Samuel Clemens — better known as Mark Twain — held court surrounded by several amused patrons.  It was long before the 18th Amendment ushered in prohibition in the U.S., but even at the turn of the century, the battle lines were drawn and the debate was heated.  Given the setting, Twain had selected that as his topic for the evening.

"I don't think prohibition is practical," he began. "The Germans, you see, prevent it. Look at them. I am sorry to learn that they have just invented a method of making brandy out of Sawdust. Now, what chance will prohibition have when a man can take a rip saw and go out and get drunk with a fence rail? What is the good of prohibition if a man is able to make brandy smashed out of the shingles of his roof, or if he can get delirium tremens by drinking the legs off his kitchen table?"

As the crowd roared, Twain stoked the fire, "Temperate temperance is best. Intemperate temperance injures the cause of temperance, while temperate temperance helps it in its fight against intemperate intemperance. Fanatics will never learn that, though it be written in letters of gold across the sky.  What marriage is to morality, a properly conducted licensed liquor traffic is to sobriety. In fact, the more things are forbidden, the more popular they become.  It is the prohibition that makes anything precious..."

The mirror behind the bar suddenly shattered as if someone had thrown a bomb at it.  The piano playing stopped and the hushed crowd watched in horror as an angry woman smashed bottles, tables and chairs with a small menacing ax.  Ranting about the evils of demon rum, she turned the mahogany bar into splinters.

Furious, Twain stomped to the bar.   The two glared at each other, nearly breathing fire.  For a few seconds each said nothing; they just stood, meeting for the first and only time in their lives, face to face —  Mark Twain and Carrie Nation.

"Madam," hissed Twain, "This is insanity."

She shot back, "Drinking is insanity."

"Women like you drive men to drink as the only way to be sane," he sneered.

"I married a fine man... a doctor," she wailed, "He was a pillar of the community, until he started drinking. It ruined him and led him to an early grave."

Twain asked, "A doctor married you?"

"He must have been looking for a cadaver."

Their meeting was short, but auspicious.  As usually happened during Carrie Nation's escapades, the authorities came and took her away, screaming about the alcohol-flooded road to ruination.

"And exhibiting," thought Twain, "exactly the same ugly behavior you might expect from some poor sot who was falling down drunk."

Disclaimer: Accounts of Brother Twain's encounter with famed teetotaler Carrie Nation are, at best, sketchy.  All reports of the incident appear to have the same source, making corroboration difficult.  It is likely a meeting of this nature took place.  While Twain's words about prohibition are his own, the remaining details above are... enhanced... under the authority of liberal use of the doctrine of  licentia poetica.

Bro. Steve Harrison, 33°, is Past Master of Liberty Lodge #31, Liberty, Missouri. He is the editor of the Missouri Freemason magazine, author of the book Freemasonry Crosses the Mississippi, a Fellow of the Missouri Lodge of Research and also its Worshipful Master. He is a dual member of Kearney Lodge #311, St. Joseph Missouri Valley of the Scottish Rite, Liberty York Rite, Moila Shrine and a member and Past Dean of the DeMolay Legion of Honor. Brother Harrison is a regular contributor to the Midnight Freemasons blog as well as several other Masonic publications. His latest book, Freemasons: Tales From the Craft, is available on amazon.com.