The New Year Is Coming, Harpocrates! 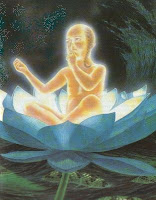 The new year is around the corner and with that comes renewal. Renewal of things both old and maybe not so old. Another beginning. As humans, we see the world and time in an odd way, we see things linearly. That is, we need a beginning, a middle and an end. From the death, springs new life. Life is after all an amazing cycle.

Although you may think at this point in this piece I am going to tell you to renew your Masonic something rather for the new year, rest easy. I'm not going to do that. But I will regale you with the tale of Harpocrates or as he may have been known to ancient Egyptians, Har-Pi-Krati. He was a god-like child figure, often depicted in the nude and sitting on a lotus flower.

He is considered in the Egyptian culture as most likely representing a renewal and new year because of a yearly consecration of peach blossoms which were given to his busts and carvings. Also, because he was the representation of Horus as a god-child, Horus representing the newborn sun at each new dawn. Masonically, there is a "cooler" connection, which is that of secrecy.

Typically in his depictions Harpocrates was shown with his finger pressed to his lips as if somehow telling us to keep a secret. So, when the Romans conquered Egypt and adopted this god, they gave him the name we have today, Harpocrates or Heru-pa-khered which meant "Horus the Child". At some point they lose the idea of renewal and focus on the outward appearance and subsequently associated him with representing secrecy, something all Freemasons value.

So, remember to keep the secrets brothers!