So I love owls. I always have and I have owl knickknacks all around the house. It doesn't take brothers long to ask about them when they visit. Fraternally, owls have been associated with countless groups; the Minerval Owl in the Bavarian Illuminati, Sophia, Columbia, a representation of general knowledge and even used in place of the Great Lights as a symbol in different countries. There are innumerable other references and meanings We won't get into those right now, there just isn't the time.

When brothers ask about my fascination, they always beat around the bush a few minutes before they ask me if I have some tie to a secret Masonic organization, which is both interesting and funny. One thing that you all may find interesting is that there actually once was a Masonic order called the Independent International Order of Owls.

It was founded in St. Louis Missouri in 1890 for the purpose of recreation and sociability among Master Masons. Its lodges were called "Nests", it's national body was called "The Supreme Nest of the World" and believe it or not, the Worshipful Master was styled a "Sapient Screecher".

The ritual of the IIOO is published on the web (1st˚) and is an interesting read. "In its native haunts the Owl is noted as being ever the enemy of the vermin and rodents that prey on the fruits of the soil. In emulation of the Owl we would have you ever be a foe of those evils which may prey on the character and fortunes of our members."

Want a petition? Sure you do. Go ahead and fill it out, although, I have no idea where you'd have to mail it. 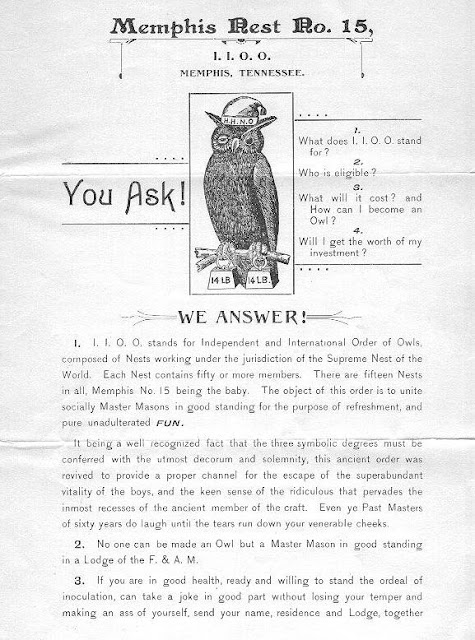 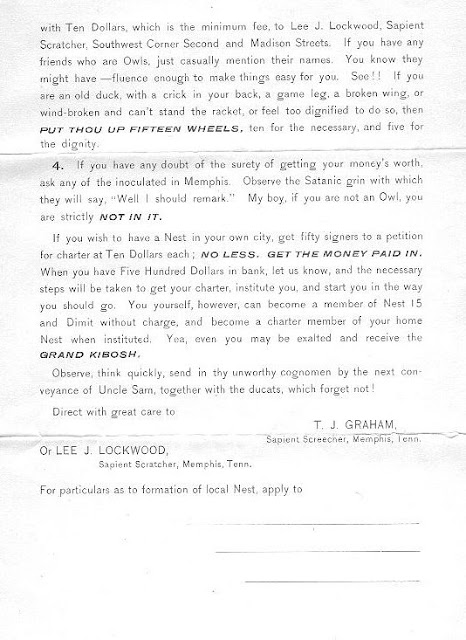 The IIOO had no relation to the OOO (Order of Owls), which was a benefit society that used some Masonic Symbolism.

Bro. Robert Johnson, PM is the Managing Editor of the Midnight Freemasons blog. He is a Freemason out of the First North-East District of Illinois. He is the Secretary of Waukegan Lodge No. 78 and Education officer for the 1st N.E. District of Illinois as well as a member on the Grand Lodge Education Committee. He is also a member of the York Rite bodies, AMD, The Illinois Lodge of Research and a member of the Scottish Rite Valley of Chicago as well as a charter member of the Society of King Solomon, a charity organization run by the Grand Lodge of Illinois. Brother Johnson currently produces and hosts weekly Podcasts (internet radio programs) Whence Came You? & Masonic Radio Theatrewhich focus on topics relating to Freemasonry. In addition, he produces video shorts focusing on driving interest in the Fraternity and writes original Masonic papers from time to time. He is also a co-host of The Masonic Roundtable, a Masonic talk show. He is a husband and father of four. He works full time in the executive medical industry and is also a photographer on the side as well as an avid home brewer. He is currently working on a book of Masonic essays.