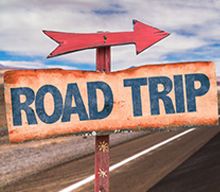 I think we're all keenly aware of the 300 years of Freemasonry were all about to witness. But, in case you aren't...the TLDR is, the United Grand Lodge of England was formed on June 24th, 1717 and Masons around the world are  about to celebrate the 300th anniversary this Saturday, June 24th, 2017. Note* I am aware of the 1721 date as well, so you don't need to email me over it ;)

Two years ago Myself along with the other members of the Masonic Roundtable decided to put on a party for this event. So we planed and are holding the biggest 300 celebration anywhere. We rented out the George Washington Masonic Memorial in Alexandria, VA. We sold tickets, invited speakers and its sure to be a blast.

Before the festivities, I had a busy week. Stated meetings on both Monday and Tuesday and then a flight to Columbus, OH on Wednesday morning. What's in Columbus? York Lodge 563, thats what! I had the honor of being their keynote speaker over their festive board last night which by the way, was a great time. The fellowship and hospitality were amazing. Thanks to Brothers David Rice, David Gizzo and brethren for having me out.

Also meeting me in Columbus however, was Bro. Michael Hambrecht, our "intern" and awesome webmaster for TMR. He and I would share a hotel room and be driving to Alexandria the next day (today...like in 20 minutes!) So he and I have about a 7 hour drive coming up, which is sure to be enjoyable as we talk about all things Masonic, not the Facebook group, just the generalizing of Masonic topics ;)

It's time to grab a bite from that delicious continental hotel breakfast and hit the road. See you in Virginia, brothers!