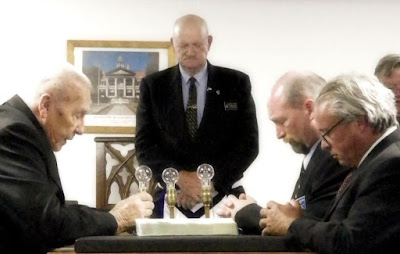 "But the real Home of the Soul cannot be built of brick and stone; it is a house not made with hands.  Slowly it rises, fashioned of the thoughts, hopes, prayers, dreams, and righteous acts of devout and free men; built of their hunger for truth, their love of God, and their loyalty to one another."

There are few Masonic writers whose work has stood the test of time as well as R. W. Brother the Reverend Doctor Joseph Fort Newton, 33°.  His best known volume "The Builders" is still considered required reading for any Mason interested in learning more about Freemasonry.  It was amongst the first books I read on the subject.  I recently acquired a 1951 reprint of that book, and there was an interesting story about one of Newton's early childhood memories and one of his first contacts with the Brethren of a Masonic Lodge.

He was at his father's funeral as a boy, and he remembered the Masons were there to do the last rites.  The Master in his tall hat, and the Brethren standing in a square around the grave, each wearing white aprons.  Each of them dropped a sprig of evergreen into the open grave as they walked past.  He learned that his father had served as Master of that Lodge of Masons.

And there was another interesting story he learned about his father.  His father had served in the Confederate Army during the Civil War.  His life had been saved by a Union Officer, a Freemason, who recognized him to be a Freemason as well.  Both of those impressions stuck with young Joseph, and years later in 1902, he was raised in Friendship Lodge No. 7 in Dixon, Illinois.

We've all heard stories like that before.  It reminds us that what we do each day doesn't always have an immediate impact.  When we attend a Masonic Funeral Rite, that impression of what we do may very well stick with some member of that Mason's family and may one day lead him to a Masonic Lodge.  That Union Officer was just doing the right thing, and he had no idea that the son of the Mason he saved would one day be prompted to join a Lodge, possibly, in part because of that story of his kindness in a time of war, and would become an influential and respected voice in Freemasonry.

It's often not the big things we do in life that have the greatest impact.  Sometimes, it's those small incidental things that we don't even give great consideration to that hold the power to change the course of a life . . . and as a result, add a little more light to the world.