A Mason Walkin' In Memphis

We'd never been to Memphis before, so this year we decided to take our annual 4th of July trip to Tennessee.  And since we were driving this time instead of flying, I decided to try and little experiment--I wore my Mason cap the whole week just to see how many comments I got as we traveled through Illinois, Missouri, Arkansas, and into Memphis, Tennessee.  Of course we did all the tourist stuff so we were enjoying these sites with other tourists: Graceland, Memphis Zoo, Beale Street, Redbird Stadium, Bass Pro Shoppe at the Pyramid,

We hadn't even gotten out of Illinois when I got the first remark.  We stopped for breakfast in Salem, Illinois at a Denny's when the waitress filled my coffee and said, "my dad's a Mason."

A couple hours later we bought gas at a truck-stop in Arkansas.  I went in to get coffee and when I went to pay for it, the cashier waved me by.  I looked at him questioningly, and he pointed to his ring and smiled.

At the Graceland Guesthouse when I checked in, the guy at the check-in desk asked me if Elvis was a Freemason.  I told him he wasn't.  "Well that kind of surprises me," he remarked.  "You guys have some nice looking jewelry, and he sure liked jewelry." 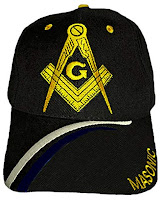 When we called Marlowe's for the pink Cadillac limo to take us to dinner (Marlowe's has some fantastic food and we ate there a couple times) the driver shook my hand in a very familiar way when we got out of the car.  Never said anything, and wasn't wearing a ring, but it was pretty clear he was a Mason.

At the Bass Pro Shop at the iconic pyramid downtown (only Bass Pro Shop I've ever been to that had valet parking), one of the security guards was a Mason, and during our discussion we learned he was a very smart man--from Illinois and a huge Chicago Cubs fan!

At a Mexican Restaurant we dined at, I got the question, "Isn't your name Hiram?"

There were a couple others--one at this huge fireworks store in Arkansas on the way home called "Boomtown" and one at the Memphis Redbirds Stadium.  I was a little surprised at how many times I was approached.  I think we've all had that experience of somebody seeing our ring, or a hat, or emblems on our car and walking up to us.  But it never ceases to amaze me how many times this happens considering just how small in numbers our Fraternity is compared to the population.

And maybe it's just that Masons are friendly people and are always anxious to meet another Brother.  I have very seldom ever passed up an opportunity to meet a Brother when I've seen a ring, a hat, or a Masonic license plate.  My youngest daughter is 12, and she picks out those Masonic symbols as quickly as I do . . . Dad!  Look!  That guy's got a Masonic tattoo!  Go find out where he's from!

And I almost always do.

Next time you go on a trip or on a vacation, try it.  It's pretty amazing the diversity of people you'll meet, and the stories you'll hear just because of this one common Brotherhood we all share.  In the end we're just all one big happy family!

So please, feel free to share your favorite "Masonic Encounter" in the comments!