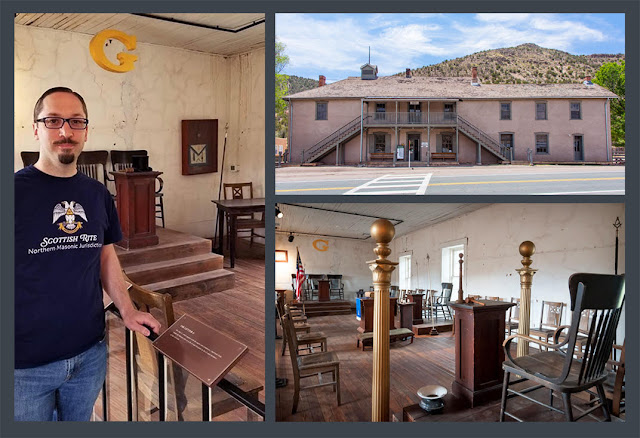 While traveling through New Mexico, my wife and I stopped in the town of Lincoln, the most famous spot in Billy the Kid country. Growing up in Arizona, I was always fascinated with Western movies and outlaw legends. My wife isn't particularly interested in Old West history, suffice to say, but she kindly conceded to let me spend a couple hours roaming around the historic sites. The town is a state monument and everything is well organized, mapped and labeled. I just figured I'd see the jail cell where Billy the Kid was held and from which he made his violent escape, then we'd shortly be on our way. Then Masonic interests took over...

When I checked in at the visitor's center, the Park Ranger behind the desk took note of my Scottish Rite t-shirt. I was pleasantly surprised when he told me there is actually a recreated Masonic Lodge room on the upper level of the Lincoln County Courthouse. Even though the Courthouse was last on the list of buildings to visit on the map, I skipped over the other spots and made a point of walking to the far end of the Main Street to go there first.

The two-story building, now known as the Old Lincoln County Courthouse, was built in 1872 and was originally used as the store and headquarters of L.G. Murphy & Co., the faction who were on the opposing side from Billy the Kid and his friends during the 1878 Lincoln County War. The building was purchased by the County in 1880, and served as the Courthouse from 1881 – 1913. It was here on April 28, 1881 that Billy the Kid famously escaped from jail after killing J.W. Bell and Bob Olinger, the two Deputies tasked with guarding him.

However, I digress. In the early years of the building's history, L.G. Murphy, who was a Mason, had constructed a Masonic Lodge room on the second floor. The Lodge as it appears today is a replica, with various Lodges around the state donating 19th Century Masonic furniture to create the aesthetics. The Ranger had mentioned that the Grand Lodge of New Mexico holds session in the room once per year and I did note a stack of newer aprons on a table in the corner (I later saw photos on Facebook of such a meeting). They've done an admirable job of recreating the overall atmosphere of a frontier Lodge and it's easy to visualize the scene while entering the room. It was an intriguing and unexpected added historical experience.

The one really disconcerting and macabre element (but fascinating nevertheless, I suppose), was the knowledge that Billy the Kid had murdered J.W. Bell in the hallway staircase just a few steps outside the Lodge room door.