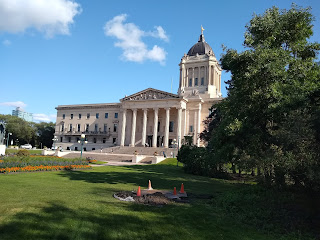 The Manitoba Legislative Building, located in downtown Winnipeg, is a cornucopia of symbolism. The building was completed in 1920. It's architect was Frank Worthington Simon. There is some evidence Simon may have been a Freemason, but nothing definitive. Nonetheless, he filled the edifice with enough esoteric elements – Masonic and otherwise – to make it an interesting and fun place to visit.

Manitoba's famous "Golden Boy," a statue of the Greek god Hermes, sits atop the dome of the 242 foot structure overlooking the city. Around the perimeter visitors can find statuary representing a number of other gods and goddesses including Ishtar, Europa, and Neptune. Two stately sphinxes lie in repose facing opposite directions to symbolically guard the entrance from above. 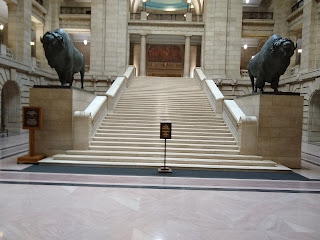 Inside, visitors find the immense grand hall measuring 66.6 feet on each side, an allusion to the number of the beast. There one also finds Medusa and Athena overlooking the grand staircase consisting of three flights of thirteen steps. In addition to the myriad of other symbolic statues, structures, and icons housed there, the building even has a room representing the Sanctum Sanctorum of King Solomon's Temple. It is the Lieutenant Governor's Reception Room and, like the Holy of Holies, entry is allowed only once a year. 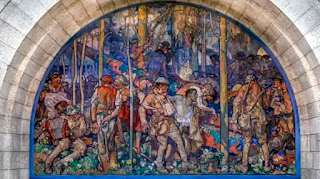 At the top of the grand staircase sits an archway crowned by a Frank Brangwyn mural. Brangwyn was a Welsh artist who, like Simon, may have had Masonic ties. At first glance the painting is a World War I scene with what appears to be a wounded man in tattered clothes being helped along by comrades. A long object, perhaps a cannon, trails the group, as they appear to be making their way through a crowd. In this configuration the painting is said to represent Canada's contribution to World War I.

A second glance at the painting reveals a faint depiction of the Madonna and Child above the head of the wounded soldier. The right shoulder of the man standing next to him seems to form a halo over the wounded man and the viewer might imagine the long trailing object to represent the cross as the painting almost transforms itself into a depiction of Christ bearing his cross to Calvary.

A closer look at the central figure reveals him wearing a white shirt opened to reveal his naked right chest, leading some to compare the scene to a Masonic initiation. Most Brothers can immediately pick up on a flaw in that analogy. However, ignoring that discrepancy it may be interesting to compare the man's garb to that worn in initiations and speculate on the artist's intent to have his subject dressed as the proverbial poor blind candidate.

Whatever you personally might see in the painting, it is always prudent to remember symbolism, like beauty, is in the eye of the beholder.