Freemasonry Thanks You 2020. No, Really. 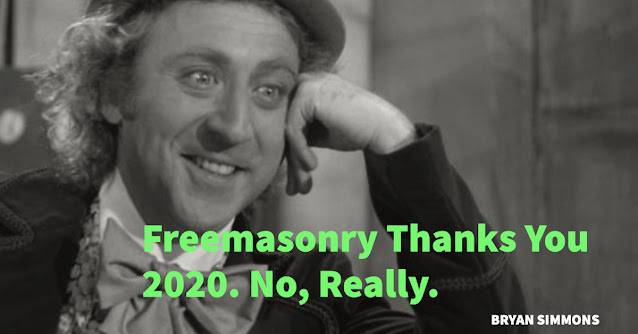 This year has been amazing for Freemasonry, more especially the future of Freemasonry. This year started out like every other, 4-5 nights out a week, mostly doing things we were obligated to do but not really enjoying ourselves. Then everything came to a grinding halt, no more meetings. Horrible right?

The pandemic realigned my priorities, my lodge’s priorities, and my family’s priorities. I completed several projects that I did not have time for around the house previously. My lodge formed work parties, created a beautiful social room in our building, and completed several other much-needed updates in the building. Most important to me, I reconnected with my family. I pulled myself away from Freemasonry to take a much more local vacation than we would have to Niagara Falls. A stop and smell the roses moment for sure.

Within a month or two, we were holding business meetings and lodge social gatherings online, and the fraternalism was still strong. Masonic Education became a focus of many. Several Brothers formed the Refracted Light Facebook group, where Brothers joined to explore a wide range of topics through presentations and panel discussions. One topic was equality, which several Brothers from Prince Hall and the Grand Lodge of North Carolina discussed and walked away with a stronger bond.

Freemasons adapt to live their ideals. Is it perfect? Of course not. But, our fraternity has not persevered for over 300 years because everything stays the same. We adjust and will continue to adjust. Now, of course, some lodges and bodies will not compromise. These are likely the same lodges that wait around for the next good man to come and fix everything for them. He may come. He may try. He won’t do it the way it’s been done before. So his ideas will be shot down, and he’ll walk on out the door.

Yes, Freemasonry will feel the aftereffects of the pandemic for years to come. The lodges that adapted have added tools to include out of state members, and speakers from around the world can now present from their living rooms. For the complacent lodges, the pandemic will likely have left you hurting for members and struggling for bodies to open your lodges. ¯\_(ツ)_/¯ It’s not your fault, though, I’m sure.

When we look back at 2020, we will view it positively, even though it doesn’t feel that way today. Let’s hope that when we can get back in the lodge and resume our degree work, we never go back to how it’s always been done, but instead that we create a new environment and actually become the premier men’s fraternity that we claim to be and lead our lodges into the future.
~BS
Worshipful Brother Simmons is, a U.S. Army Veteran and native of Massachusetts is a Past Master of Ezekiel Bates Lodge in Attleboro, Massachusetts. Brother Simmons has held many pillar offices in several appendant bodies and currently serves on the several committees for the Grand Lodge of Massachusetts as well as several standing and Ad-Hoc committees for the city of Attleboro. Brother Simmons thrives in behind the scenes work his most notable accomplishment is the founding of Masonic Con in 2016 at Ezekiel Bates Lodge, which has provided fraternalism and education to countless Brothers across the country. Brother Simmons currently co-hosts two podcasts Worthy and Well Qualified and Arts, Parts, and Points, An Exchange of Masonic Education and Ideas.