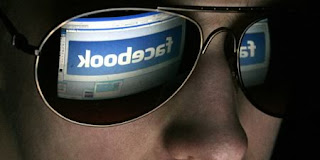 I was reading an article yesterday that said 1 in 4 Americans use Facebook, and the average amount of time they are using Facebook is 6 hours per week.  Six hours per week?  Holy crap!  That seems like a lot until you figure that's less than an hour a day!  If you're on Facebook six hours a week, you're spending about two weeks a year "liking" things, and ROFL and LOLing.  And I'm on there more than that.
So then I get thinking about what I'm getting out of Facebook.  Sure, you can keep up with your friends.  I get into some interesting and lively conversations.  I'm sometimes very amused with the exchanges I get into.  I've got a lot of very quick witted friends, and they put me to the test often.  I'll have to admit, it's great fun.

But there's another side of it too.  Clive James was known for saying "Fiction is life with the dull bits left out."  Sometimes I think I know where the dull bits go--Facebook!  I catch myself doing it.  Posting meaningless remarks, and commenting on other people's meaningless remarks.  Commenting for the sake of commenting.  Surfing around in Facebook land for something interesting through mountains of stuff that's not that interesting when there's other things I could and should be doing.
So I'm going to give it up for a while.  Maybe I'll finally find a direction for this blog.  It's a real mess.  I haven't really found my blog niche.  But I think I know where I'm going now, so we'll see what happens with that.  Maybe I'll finally get serious about the next book project.  Do some reading.  There's a lot I could do with that time.
Imagine what you could do with an extra two weeks a year.  Think about it.  What are you really getting out of Facebook?