When the Space Shuttle Atlantis touched down on Thursday, it ended America's longest running spaceflight program.  "After serving the world for over 30 years, the space shuttle's earned its place in history. And it's come to a final stop," radioed commander Christopher Ferguson as Atlanta rolled to a stop.  "Job well done, America," came the reply from Mission Control.
﻿
﻿
Oddly enough, the grand finale of the Space Shuttle program came to an end fifty years to the day that Astronaut Gus Grissom became the second American in space on July 21, 1961.  John Glenn had been there first, only a few months before.  Although Gus Grissom wasn't first, he would be the first American to make two trips into space.  John Glenn would eventually receive that honor, but it would take him a few years to get back into space--37 years to be exact.  He returned to space aboard the Space Shuttle Discovery at the age of 77.
﻿﻿﻿
﻿
But both men shared something besides being amongst America's first astronauts--they were both Freemasons.  John Glenn is a member of Concord Lodge No. 688 in Ohio, and Gus Grissom was a member of Mitchell Lodge No. 288 in Indiana.  In fact, many of America's early astronauts were Freemasons, including Buzz Aldrin, Gordon Cooper, Don Eisele, Fred Haise, Edgar Mitchell, Wally Schirra, Thomas Stafford, James Webb, and Paul Weitz.
Many of these brave men were pilots before they were astronauts--several flew fighters in World War II and the Korean War.  They were a unique breed of fearless adventures that while understanding the risks, were willing to take them in order to achieve the gains.  And the men and women that followed aboard the Space Shuttles shared that same unique spirit. 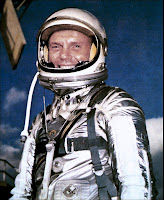 The future of NASA is fuzzy and uncertain at this time, which is a shame.  NASA has always represented that spirit of exploration that has always been a part of the American tradition.  It would indeed be a shame if exploration of the unknown questions in our universe were abandoned by the very country that has always lead the way.
~TEC