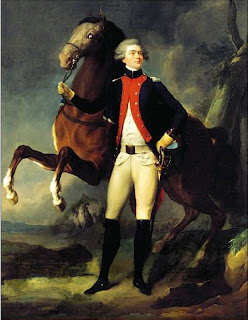 "Humanity has won its battle. Liberty now has a country."
~Marquis de Lafayette

He was recruited to serve in the Continental Army in France by Silas Deane, and an agreement was struck with French military expert, Baron Johann DeKalb, and his protege, the Marquis de Lafayette, to offer their military knowledge and experience to the American cause. Of course, as it turns out, the young Lafayette had no military experience, but was more than willing to learn.

But King Louis XVI feared angering Britain by sending aid to America and prohibited Lafayette's departure. The British ambassador to the French court at Versailles demanded the seizure of Lafayette's ship, which resulted in Lafayette's arrest. Lafayette managed to escape, set sail and elude two British ships dispatched to recapture him. Following his safe arrival in South Carolina, Lafayette traveled to Philadelphia, expecting to be made General George Washington's second-in-command. Congress was reluctant to promote him over more experienced colonial officers because of his age and inexperience, but the young Frenchman's willingness to volunteer his services without pay won their respect and Lafayette was commissioned as a major-general.
﻿
Lafayette served at Brandywine in 1777, as well as Barren Hill, Monmouth and Rhode Island in 1778. Following the formal treaty of alliance with Lafayette's native France in February 1778 and Britain's subsequent declaration of war, Lafayette asked to return to Paris and consult the king as to his future service.  He earned the respect and friendship of General George Washington, and that friendship endured for the rest of Washington's life--in fact, Lafayette named his son after General Washington. 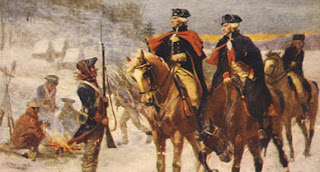 On the topic of Freemasonry, it has been disputed for two centuries where Lafayette became a Mason. There are no definitive records showing exactly when and where Lafayette was initiated. Lafayette was a hero of both the American Revolutionary War and later two French revolutions. Freemasons from both countries are anxious to claim him as their own. French Masonic scholars believe he was made a Mason in France prior to coming to American and enlisting in the Continental army. However, the most widely accepted and best supported belief is that Lafayette was made a Mason after coming to America, most likely after meeting George Washington. This version is supported by Lafayette’s own writings. American Masonic scholars place the time of the initiation during the winter of 1777-78 when Washington’s army was wintering over at Valley Forge. It is believed that General George Washington himself may have acted as Master of the Lodge during Lafayette’s initiation ceremony.

Dr. George W. Chaytor was a noted Masonic scholar and past master. Addressing the Lafayette Lodge No. 14 in Wilmington, Delaware, on January 18, 1875, on the occasion of the lodge’s fiftieth anniversary of its constitution, he made the following statement on the subject of Lafayette’s admission into the Masonic order:

He [Lafayette] was not a Mason when he landed in America, nor was he a Mason at the Battle of Brandywine. The Army under Washington, in December, 1777, retired to Valley Forge, where they wintered. Connected with the Army was a Lodge. It was at Valley Forge that he was made a Mason. On this point there should be no second opinion—for surely Lafayette knew best where he was made a Mason.

Lafayette’s own remarks do support the fact he was made a Mason in America, after having met General George Washington. Lafayette said, “After I was made a Mason, General Washington seemed to have received a new light—I never had, from that moment, any cause to doubt his entire confidence. It was not long before I had a separate command of great importance.”