Of course when you think of Freemasons and beer, most people think of one Freemason in particular.  Samuel Adams.
And rightly so.  The Samuel Adams Brewery produces in my opinion (which is backed up by years of extensive field research) some of the most finely crafted beers in America.  But in reality, all evidence seems to discount the fact that Samuel Adams was a brewer. Sam Adams was a malter--he worked in a malthouse which produced malt that was used in beer, but he was not a brewer himself.  But he was a great American Patriot, a Founding Father, and also a man that enjoyed a nice dark ale. 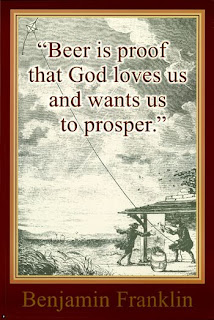 You might even think about Benjamin Franklin.  He was a man that enjoyed all the pleasures that life had to offer, and sometimes to excess as he would be the first to admit.  He also coined the famous quote that all beer drinkers know by heart, and share enthusiastically the sentiment.
But in reality, it was George Washington that perhaps knew his beer better than any other of the Founding Fathers.  And after the Revolutionary War, George Washington had a strictly "Buy American" policy about beer as he told his friend Lafayette in a letter, "We have already been too long subject to British prejudices. I use no porter or cheese in my family, but such as is made in America; both these articles may now be purchased of an excellent quality."

George Washington bought his porter from a brewer in Philadelphia.  In fact, it was his secretary's job to make sure he was well supplied when he returned to Mount Vernon.  Washington's secretary, Tobias Lear once wrote to the brewer:

﻿
﻿
"Will you be so good as to desire Mr. Hare to have if he continues to make the best Porter in Philadelphia 3 gross of his best put up for Mount Vernon? as the President means to visit that place in the recess of Congress and it is probable there will be a large demand for Porter at that time."
I take that to mean that when George was home, it was important to make sure the fridge was well-stocked with cold beer.  Of course, if George ran it, all wasn't necessarily lost--he had his own beer recipe.
That's right, it wasn't Sam Adams that was the brewer, it was George Washington.  In fact, he wasn't only a home brewer, he was a distiller as well.  In 1799, Mount Vernon was the largest producer of rye whiskey in the United States.

Ever since the birth of our nation, beer has been the beverage of choice for Americans.  In fact, at a large parade in Philadelphia that celebrated the ratification of the Constitution, several of the local brewers marched in the parade under a banner that read:  "Ale--proper drink for Americans."