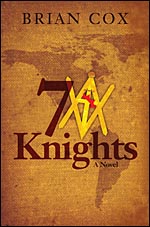 My friend (and Brother Master Mason) Brian Cox published his long-awaited book earlier this week 7 Knights and it's available at Amazon.com and Barnes & Noble (amongst others).  I got my autographed copy last week when I went to see him speak at a local lodge.  I just got started into reading it last night, but I can tell you it's difficult to put down once you get started.  I'll no doubt have more to say about it once I get done.  In the meantime--congratulations to Brian on the publication of his first novel!
From the Publisher:

Recent West Point graduate Walt Tyler has nearly everything in life: respect as a successful quarterback, the affection of an attractive doctor, and a well laid-out military career. But Walt is plunged into the fight of his life when terrorists begin killing off the hidden network of Templar Knights, led by seven vital figures. Walt's grandfather, newly elected U.S. President Preston Tyler, one of the seven, holds the key to protecting the knights. He reveals to Walt the clandestine establishment intended to protect Christians during the last days. Having existed since the inception of the Knights Templar, the cryptic order of the Seven Knights has remained veiled for centuries. Brought up through history under the blanket of the Ancient Free and Accepted Masons, the Seven Knights maintain an exclusive membership of only seven men, powerful individuals including politicians, military leaders, corporate geniuses, and financiers from around the globe.
The sudden attack on the knights can only mean one thing: the antichrist is coming. In Brian Cox's gripping novel, Walt and Preston's desperate escape leads them along a modern underground railroad through the long-established safe havens of the Biltmore and the Hermitage as they attempt to discover by whom their death is being sought and how their centuries-old secret has leaked. Can Walt and Preston stop the terrorists before all Seven Knights are murdered?