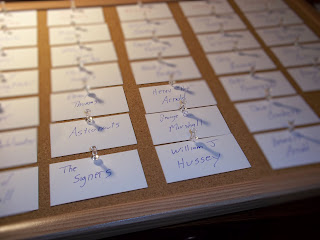 I think I finally got it!  I've had a breakthrough!  It looks like this project is a go. . . finally.

It always starts the same way.  I start with about a hundred and fifty names of worthy Famous American Freemasons written on business cards, and a bulletin board.  I've sometimes spent weeks narrowing that list down to just thirty names.  I'll change up the categories, I'll take a few names out of the mix, sometimes I have to go back and find some more names. When I finally get those names and categories finalized, I tack those names down, and hang the bulletin board on the wall in my cave--but the names and the categories often continue to change even as I'm researching and writing the book.

It's not as easy as you might think, because there are a few things I like to do in each section of the book.  I like to include a couple names in each category everybody knows well, a couple most people are familiar with but don't know that much about, and maybe one name few people would know--but should.  And I also like to cover several different eras in American history in each category too.  So basically, I make it as difficult on myself as possible.

I've had a terrible time getting this volume to work out to my satisfaction, and had pretty much given up on the idea there was ever going to be a Volume III.  In fact, I've made it widely known there wouldn't be another one. That's part of the reason I took some time off the midnight shift.  I decided to take a little time to sit back and try and decide what I was going to do next.  Another novel?  Take up another Freemasonry topic to write about?  Or finally finish the the Famous American Freemason series I started back in 2006?

The decision is made.  I'm going to finish the Famous American Freemason series next.

But that won't be the next book out.  I've got one done now.  I finished a novel over Memorial Day, A Shot After Midnight.  It's a sequel to One Last Shot.  We're just beginning the editing process on it.  It will be out in Spring of 2012.  So I'm shooting for a Fall 2012 release for the final volume of Famous American Freemasons. For some reason, I seem to finish fiction in the spring and non-fiction in the fall.

So within the next month or so, my sunny blog will go dark again, the moon and stars motif will return, and the midnight shifts will resume.  I should be well rested, energized, and ready to tackle it by then.

If you have a favorite Famous American Freemason I haven't written about yet, please feel free to email me at webmaster@toddcreason.org.  As I said, that line-up will go through some changes--it's just a starting point.  In fact, a suggestion a friend of mine made was the key to getting this line-up to finally work--it lead me to a whole new category I hadn't explored in the series yet.