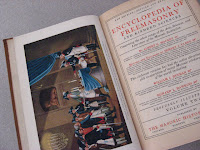 One thing I've discovered since I joined the Fraternity, is that there are a lot of collectors of Masonic memorabilia--and I'm one of them.  It's unbelievable how much of this stuff is out there.  You could fill an entire library with just books on the topic of Freemasonry (and many collectors do).  And of course you'll need a few Masonic bookends for that library (and I don't know how many different kinds of Masonic bookends I've run across).

Another highly collectible favorite is antique Masonic jewlery--the quality and styling of some of the old Masonic rings is absolutely stunning.  And there are watches, tie tacks, lapel pins, cuff links, shirt studs.  And you'll find it everywhere.  Garage sales, flea markets, antique stores, thrift shops, estate sales.  You could never collect it all in a lifetime--especially the lapel pins.

Some of the jewelry will run you, but the nice thing about collecting Masonic memorabilia is that you don't have to spend a fortune to build a nice collection.  I only have a modest collection, but I started by collecting Royal Arch Chapter Pennies.  My wife dragged me to the Covered Bridge Festival in Indiana (as she does every year).  It's acres and acres of flea markets.  I got bored and started looking in cases.  I found an old Royal Arch penny in one of the cases.  I bought it, and then I was on a mission from that point forward.  I found four more that day before we left, and never paid more than $3 for one.  And that's how it began.

Some collectors get pretty specific.  Some only collect items from one Masonic body--like the Scottish Rite or Shrine.  Other's just collect one thing--I know a collector in Ohio that only collects Knights Templar swords.  He won't tell me how many he has, which is a good sign he has a lot.  Another guy I know collects Masonic tableware (that's right, plates, glassware, cutlery, etc.)  Back in the day, and still in many places today, the Freemasons put on very fancy dinners and table lodges.  And there are a lot of Masons that collect Masonic prints, photographs, and postcards.
Another fun part of collecting is finding things for other collectors you know.  It's always fun to run across something that doesn't interest you very much, but you know one of your friends would flip over. I ran across an old Shriners fez not too long ago, and sent a picture with no text attached to a guy I know that collects Shriners memorabilia. I got a two word response--how much?  Boy was he happy when I told him what it was selling for! 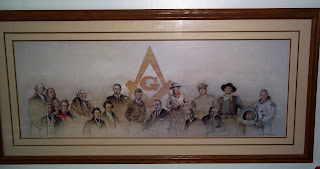 I collect a little bit of everything. One of my favorite pieces is one I got for my birthday a couple years ago from my parents. Could you think of  better gift for a Mason known for writing books about Famous American Freemasons, than an old print featuring a group of famous American Freemasons?
So next time your wife drags you antiquing, or to the fleas market, why don't you see if you can find any old Masonic stuff amongst the treasurers on display.  You might just find a passion for collecting like many other Masons have, and instead of your wife dragging you to those things, you'll be dragging her!
Happy collecting!
~TEC