The Great Cheese-Ball Incident of 1863


At the outset of the Civil War, Lt. Second Class Charles W. Read resigned his commission in the
US Navy and joined the Confederate Navy.  Initially assigned to the CSS McRae in New Orleans, Read eventually was given an assignment on the CSS Florida.  On May 6, 1863, in Brazilian waters, the Florida captured the merchant vessel Clarence, as it headed for  Baltimore.  The captain of the Florida, John Maffitt, assigned Read and twenty crew members  to take command of the Clarence.  Armed only with a small howitzer, Read devised a plan to use the innocent-looking ship, along with its valid registry papers, as a decoy to invade the harbor in Hampton Roads, Virginia. 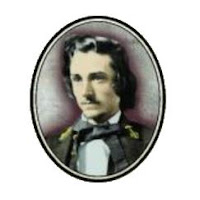 During the long voyage north, the crew of the Clarence fashioned mock cannons which could be used to make the ship look like it was well armed, but easily hidden to keep the ship disguised as an innocent merchant vessel.  Beginning June 6, over a three week period, Read and his crew went on a stealthy rampage, capturing no less than 22 United States ships.  On two occasions, they scuttled the ship they had been sailing and transferred to the captured vessel, first to the Tachony, then to the schooner Archer.

Once on the faster Tachony, Read abandoned his plans to raid Hampton Roads and continued to surprise US vessels at sea instead.  He continued to evade capture for the most part because US authorities, having learned of the initial capture, continued to look for the Clarence.

The Archer headed up the east coast to Portland, Maine.  There the crew made its way into the harbor and commandeered the cutter Caleb Cushing.  Crews from Portland set out after the Cushing in three steamships, the Forest City, Casco and Chesapeake.  There was little wind and the steamers easily overtook the Cushing.  Set to defend themselves the Cushing crew members soon discovered their ship was armed with plenty of powder, but only five rounds of ammunition.  They fired off the five rounds, each shot missing its target.  Then, in desperation, crew members stuffed a ball of Dutch cheese found on board into a 32-pounder cannon and fired it at the steamboats.  The cheese ball separated, melted and showered the bewildered Portland crews with smelly, dripping, goo.

It was the Cushing's last hurrah.  Read's crew set it on fire and took to the lifeboats.  The steamboats closed in, with Lt. James H. Merryman, captain of the Forest City, in charge.  As Merryman approached, the doomed crew members in lifeboats repeatedly gave the Masonic Grand Hailing Sign of Distress.  Merryman, undoubtedly a Freemason who reported recognizing the "Masonic signs," spared the Confederate crew.

Later, as Read and his crew were led through the streets of Portland, angry citizens threatened to lynch them but Merryman, his crew and their Masonic ties with the prisoners prevented the lynchings and again spared their lives.

Read's Masonic status is uncertain.  Masonic tradition would be to spare only the Freemasons in the group.  In this case, Merryman extended mercy to the entire crew, including Read.  This could mean every Confederate raider, including Read was a Mason.  It could also mean Merryman spared the lives of the non-Masons. We will most likely never know.

James Merryman remained at his post in Portland as a United States Marine Inspector and eventually attained the rank of Captain.  For his exploits Read earned the nickname "Sea Wolf of the Confederacy."  He continued his military career and was awarded the Confederate Medal of Honor for his service.  He died in 1890 at his home in Meridian, Mississippi at the age of 49.