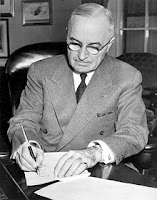 One of the joys of reading history is discovering moments that illuminate something in the past, especially about a person’s character. Prominent men and women leave a trail of public and private papers, and historians comb through them, hoping to flesh out stories of great and important events. But it’s the little things, the mundane, that are often the most fruitful.

Harry Truman, as County Judge, Senator, Vice President, President, and Grand Master of Masons in Missouri, left behind a vast library of documents. His correspondence in particular is worth reading, and one letter he wrote on March 10, 1941, tells something of his attitude toward the caliber of men he called “Brother.” It seems that an Entered Apprentice was wearing the square and compasses about town, and the lodge secretary, concerned about this breach of Masonic practice, wrote the Grand Master to ask what he ought to do about it. Truman replied as follows:

“A fellow is misrepresenting the facts, of course, when he wears a Square and Compasses when he has not yet finished the first three degrees. Usually a little reasoning convinces these fellows that they are not helping themselves nor the Fraternity by being forehanded and over enthusiastic. I have had the same experiences at home, and I am sure that if you will tell these fellows just exactly what they are doing, they will stop it.”

It’s not often that so short a document can illustrate one man’s intelligence, easy authority, and basic decency, but this one does it. In three sentences, he affirmed that the secretary was right in his understanding of Masonic practice, informed him that correction was called for, and exemplified the gentle, respectful, and personal nature of the correction required. It’s a brilliant bit of writing, in a real voice that’s recognizably Truman’s, and thoroughly Masonic. It assigns no motives other than enthusiasm, and assumes the intelligent good will of all involved.

Harry Truman was not naïve: he knew evil existed, that there were bad men in the world, and that force was often necessary. But he preferred to start from a position that assumed decency and trust, for he knew if he did not then neither decency nor trust would be achieved. It’s a lesson of history, contained in one short and routine letter, from a too-busy Grand Master and Senator to a lodge secretary: Harry Truman was a Mason to his marrow.