I attended the 2016 AMD – Masonic Week that was held in Crystal City, Arlington VA near the Reagan National Airport. This was the first year for this location after the last three in Reston, Virginia. For those that don’t know, this event is organized by the Allied Masonic Degrees (AMD) and is co-hosted by several other Masonic organizations such as the Knight Masons, Blue Friars, The Masonic Society, etc. It is a four day event running Thursday – Sunday that includes business meetings, special degrees, expensive dinners and most importantly lots of great conversations.

This event tends to attract many of the big names in Masonry such as Brent Morris, Thomas W. Jackson, Jason Richards, Jon Ruark, Robert Davis and more. Its great fun getting to speak with them person. In all, there are typically 300-400 brethren from around the United States and a foreign lands that come to DC for this meeting.

Many of the masonic bodies that hold their meetings here are invitational only and seem to have many of the same members who simply trade sashes and titles between the various business meetings. However that doesn’t mean there isn’t plenty to do at AMD – Masonic Week. For example, I attended the Society of Blue Friars to see Michael Halleran become a member of this esteemed body. Blue Friars are a group of masonic authors and one can only be elected by the membership. Their meetings are open to the public however and it always includes a great lecture. 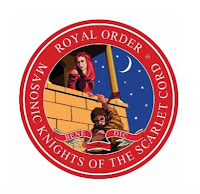 On Saturday afternoon, I was initiated into The Royal Order Masonic Knights of the Scarlet Cord of the United State of America, which is a relatively new body in the United States having been established here in 2012 via the United Kingdom. There are 6 grades to this order and I was given the first 3. A very interesting experience. The brethren who performed the degrees did a great job in putting on the degrees.

Take a look at the Masonic Week website for more details on what takes place during this event. If you ever have the chance to attend, I highly recommend it. I want to especially thank Brother Moises Gomez of New Jersey who does a great job in coordinating the entire event. Without his efforts it wouldn’t happen.

WB Gregory J. Knott is the Past Master of St. Joseph Lodge No. 970 in St. Joseph (IL) and a plural member of Ogden Lodge No. 754 (IL), Homer Lodge No. 199 (IL) and Naval Lodge No. 4 in Washington, DC. He’s a member of the Scottish Rite, the York Rite, Eastern Star and is the Charter Secretary of the Illini High Twelve Club No. 768 in Champaign-Urbana. He is also a member of ANSAR Shrine (IL) and the Eastern Illinois Council No. 356 Allied Masonic Degrees. Greg serves on the Board of Directors of The Masonic Society and is a member of the Scottish Rite Research Society and The Philathes Society. Greg is very involved in Boy Scouts—an Eagle Scout himself, he is a member of the National Association of Masonic Scouters