A few years ago at Missouri’s Grand Lodge session, the Grand Secretary asked me, with approval from the Grand Master, to take some photographs of the tiled Grand Lodge meeting.

We held the meeting in a large conference center jam-packed with over 1,000 Brothers. As I walked around the room trying to figure out the best angles for the photographs it became apparent I wouldn’t get a good photo from the convention floor. Fortunately, there was an office area above with a bank of draped windows overlooking the cavernous meeting room. That, I figured, would give me the best vantage point for the shot the Grand Secretary wanted.


I hauled my equipment upstairs and entered the office. There, I peeked out of each window to determine the best angle for my impending work of art. I selected the appropriate window, opened the drapes just enough to stick my head and camera through, knelt and started snapping pictures.

When I lowered my camera I noticed a flurry of activity on my end of the room. Right below me, Brothers were waving their arms and pointing at me. Some were even heading toward the door. Momentarily, the meeting stopped. The Brothers had exposed a cowan in their midst… and it was me!

Being a man of decisive action, I decided it was time to make a quick exit. “Feet,” I thought, “don’t fail me now.” I grabbed my stuff, whirled around and prepared to make myself scarce.
Too late.

As I stood up, the office door flew open. There, holding his angled rod in front of his body with both hands, legs planted apart, silent and ready for battle, stood the Grand Pursuivant.

Do I need to mention it was an uncomfortable moment?

I didn’t know the man but it was pretty obvious he was a Brother. As a few others began to show up behind him, I introduced myself and told him what I was up to. It didn’t take too long to convince him I was legitimate and the crisis quickly ended. A few smiles even broke out.

I suppose there are some things to be learned from the incident… like, for example we probably should have announced that the photos were being taken. Mainly, however, I learned some Brothers apparently have eyes in the back of their heads, since they were all facing away from me when I took the pictures.
Although I edited the Missouri Freemason magazine at the time I never published the photo. The only use ever made of it was a copy that now hangs in the Masonic Museum at the Masonic Complex in Columbia.

That Grand Pursuivant, Richard Smith, was elected Grand Master of the Grand Lodge of Missouri in September, 2016. We’ve gotten to know each other pretty well and every once in a while we share a smile recalling the way we met. 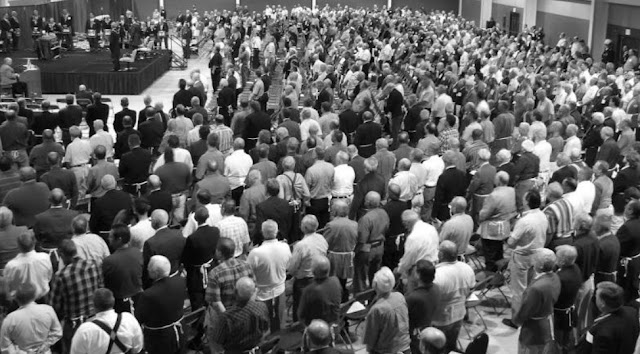