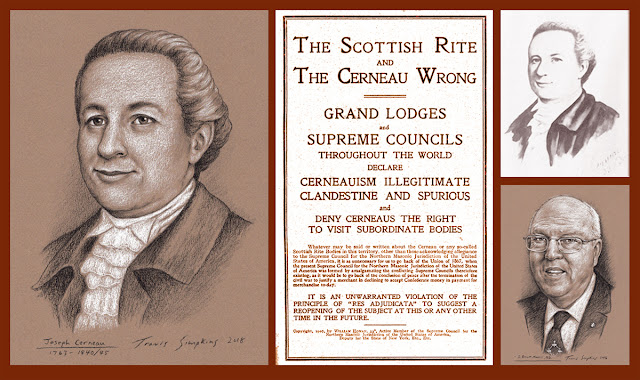 In 1807, Joseph Cerneau (1763-1840/45) created his own Supreme Council in New York City. He didn't have any official authority to do so and his system was deemed illegitimate by the Supreme Council in Charleston. Nevertheless, his Cerneau Rite attracted many influential Masons of the time, including DeWitt Clinton, Grand Master of the Grand Lodge of New York. As a result, Cerneau's competing system of Scottish Rite degrees plagued both the Southern and Northern Jurisdictions for most of the 19th Century. It's a fascinating story of mergers, splits, contempt and treachery. Despite the long-lasting chaos that he caused, little is recorded about Joseph Cerneau's life and up until now there was only one known portrait of him.

In 1938, a halftone image of Joseph Cerneau was published in Samuel H. Baynard's History of the Supreme Council, Scottish Rite Freemasonry, Northern Masonic Jurisdiction. The halftone image is a vague remnant of a photo taken of a miniature portrait of Cerneau painted on ivory. Both the original photo and the ivory miniature have been lost.

A few months ago, I was contacted by S. Brent Morris, 33°, GC, who serves as the editor of Heredom (the annual publication of the Scottish Rite Research Society). He requested that I create a new portrait of Joseph Cerneau based on the limited information available. I had created composite portraits of historic figures before, but in such cases I had the convenience of looking at and combining several different known likenesses to form a new one. With there being only one known portrait of Cerneau, and a frequently published one at that, I really had no option but to use that image as a starting point and foundation. I simply envisioned the form and detail that the original ivory miniature likely contained and added that, but was also conscious to correct the distorted proportions and make the facial features appear more natural. The resulting, newly finished charcoal portrait of Joseph Cerneau made it's debut on page 61 of HeredomVol. 25, included in an essay by Arturo de Hoyos, 33°, GC, titled “The Supreme Council of the 43rd Degree.”

The book has already been shipped to Scottish Rite Research Society members and will soon be available for general purchase through the Southern Jurisdiction's online store here:

In addition to HeredomVol. 25, I'd suggest that readers interested in the subject of Cerneauism also seek out copies of Committed to the Flames by Arturo de Hoyos and S. Brent Morris (Lewis Masonic, 2008) and CollectaneaVolume 24 Parts 1 to 3 printed by the Grand College of Rites.

Travis Simpkins is a freelance artist with clients throughout the United States and Europe. He currently works on projects for the Supreme Council, 33°, NMJ in Lexington, Massachusetts. He also serves as a portrait artist for the Grand Lodge of Massachusetts, Grand Lodge of New Jersey and other jurisdictions across North America. His artwork is in many esteemed collections, including the Harry S. Truman Presidential Library & Museum in Independence, Missouri.