November has been declared Scottish Rite Month, by SGC, David Glattly and what that means, is that this month in particular we should be proud to be 32nd degree Scottish Rite Masons. Back in August, I was thumbing through The Northern Light, the AASR NMJ's publication and I came to a page that was striking. 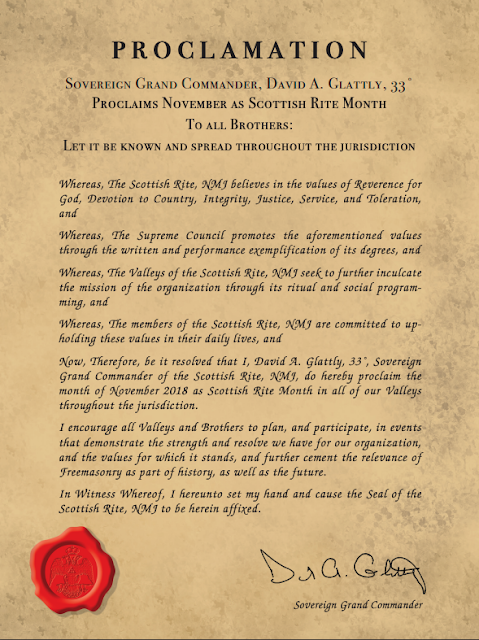 The full text of the proclamation, in case the picture is too hard to read is as follows:

To all Brothers:
Let it be known and spread throughout the jurisdiction

Whereas, The Scottish Rite, NMJ believes in the values of Reverence for God, Devotion to Country, Integrity, Justice, Service, and Toleration, and

Whereas, The Supreme Council promotes the aforementioned values through the written and performance exemplification of its degrees, and

Whereas, The Valleys of the Scottish Rite, NMJ seek to further inculcate the mission of the organization through its ritual and social program- ming, and

Whereas, The members of the Scottish Rite, NMJ are committed to up- holding these values in their daily lives, and

Now, Therefore, be it resolved that I, David A. Glattly, 33 ̊, Sovereign Grand Commander of the Scottish Rite, NMJ, do hereby proclaim the month of November 2018 as Scottish Rite Month in all of our Valleys throughout the jurisdiction.

I encourage all Valleys and Brothers to plan, and participate, in events that demonstrate the strength and resolve we have for our organization, and the values for which it stands, and further cement the relevance of Freemasonry as part of history, as well as the future.

In Witness Whereof, I hereunto set my hand and cause the Seal of the Scottish Rite, NMJ to be herein affixed.

Freemasonry itself is something that we perpetually celebrate, but all too often perhaps, it is part of the norm and we may take it for granted. November is a month in which we can make an extra effort to get out to our valleys, go to events, celebrate the charities, see the degrees at the fall time reunions and come together as not just Masons, but perhaps those who are of the Royal Secret.

What can you do? What can you expect this month? Recently The Northern Light has begun a web series designed to be quick, and to the point. It's called TNL On Air. Here is the latest from them, featuring SGC Glattly speaking about Scottish Rite Month. Enjoy and remember, "Spes mea in Deo est!"

RWB, Robert Johnson is the Managing Editor of the Midnight Freemasons blog. He is a Freemason out of the 1st N.E. District of Illinois. He currently serves as the Secretary of Spes Novum 1183 UD. He is a Past Master of Waukegan 78, and Past District Deputy Grand Master for the 1st N.E. District of Illinois. Brother Johnson currently produces and hosts weekly Podcasts (internet radio programs) Whence Came You? & Masonic Radio Theatre which focus on topics relating to Freemasonry. He is also a co-host of The Masonic Roundtable, a Masonic talk show. He is a husband and father of four, works full time in the executive medical industry. He is the co-author of "It's Business Time - Adapting a Corporate Path for Freemasonry" and is currently working on a book of Masonic essays and one on Occult Anatomy to be released soon.