100 Years Of Jobs Daughters and The Gavel - “ Honor your past for a brighter future.”

This year marks the 100th anniversary of Jobs Daughters. Founded in 1920 by Mrs. Ethel T. Wead Mick in Omaha, Nebraska. They take their teaching from the story of Job and his trials. And in particular to a reference in the 42nd Chapter that says, "And in all the land were no women found so fair as the Daughters of Job." I had the pleasure of serving as the Master of Ceremonies for my Daughter as she took the Chair of Honored Queen. With that comes a speech, and it is a custom to acquire a gavel. Sending out a few requests, one Brother stepped up and had a gavel made. Here is the expert from the speech.

"We have an extra special gift prepared for you, and this gift also has a story, a story of Brotherhood and obligation. I had contacted a few Brothers and ask them if they knew anybody who could make a gavel for my Daughter, who is preparing to become Honored Queen. Without hesitation and on the other side of the country, Brother Brandon Hale stepped up and said, "I will take care of it." He asked what type of gavel I had in mind. Although I left it entirely up to him for style, I did request he incorporate some nuances of Jobs Daughters. Brother Brandon lives in Virginia, and he has a message for you regarding the gavel:


"There is a maker's mark on the gavel from the Brother who made it. It's for Job's Daughters. The JD print is his mark. It just hit me that it was meant for him to make it. His name is Joseph DiPietro. He has a heart of gold, and I love him like family. "

Brother Brandon had this gavel made, especially for you. The man who made it, Joseph DiPietro, is a Mason; the man handing it to you, Brother Brandon, is also a mason. A story of obligation, for three men who have never met in person, could come together and produce a gavel for their Masonic daughter. Never look at the Jobs Daughters as "just a club" or say, "it's just a ceremony." This act proves there is a much deeper meaning to our Masonic family than just a club. Just as every Mason is my Brother. Every Jobs Daughter is your sister. " 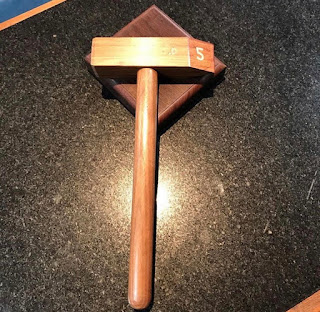 Just a few years prior, my Daughter was embarking on a journey, walking in the same steps as her great Aunt before her. Luckily our Aunt with us the day she was made a Jobs Daughter. But sadly, she never did get to see her great-niece take the gavel in her hands, but, her Spirit lives on. Through my daughter's theme, "Honor your past for a brighter future," and through the Spirit of Freemasonry. The legacy of not only Craft, jobs daughters, but sisterhood and Brotherhood will forever live in the hearts and minds of those who attended that event. And the gavel will forever be a testament to Brother Love, Relief and Truth

Michael Laidlaw was raised to the Sublime degree in 2011 and is a plural Member of South Pasadena 290 and Southern California Research Lodge where he is Junior Warden and Pop Culture editor for The Fraternal Review Magazine. He is also serving as Senior Steward for Arcadia 278. Michael is an active council member for Jobs Daughters Bethel 210 Arcadia (where his daughter is serving as Honored Queen) and serves on the Grand Lodge of California Youth Orders Committee. He is a 32° Scottish Rite Mason from the Valley Of Pasadena Orient of California where he has completed all three Master Craftsman Courses. Michael is also a member of San Gabriel Valley Chapter No. 100 RAM, Alhambra Council No. 25 CM, and Foothill Commandery No. 63 KT. He also holds Membership in Cinema Grotto and Order of Eastern Star.