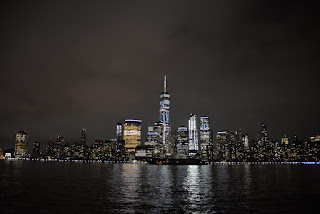 September 11, 2001 I was angry, I cried, I was distraught, I was confused and countless other emotions that most Americans felt. It was the worst day in my lifetime of attacks on the American homeland.

September 12, 2001 I woke up as most American’s did and tried to begin to figure out what happened in New York City, Washington DC and Shanksville, PA. From coast to coast we united as one country, as Americans. We weren’t white, black, hispanic, asian, native american or other ethnicities, we were simply AMERICANS.

People flocked to church to pray for those lost in the attacks, blood drives were going full force, flags were flying from every big and small town, members of both parties in the United States Congress gathered on the capitol steps to sing together. Our first responders were our heroes as they selflessly rushed into the crash sites to help others, and so many of them gave their lives doing so. People flooded recruiting stations to sign up for the military, such as United States Army Sergeant Major Thomas P. Payne, who was recently awarded the Congressional Medal of Honor for gallantry in Iraq.

We stood side by side with a determination to pull our country together in a show of unity that I hadn’t seen before in my lifetime or since. United we stood.

19 years later, our country is bitterly divided along ethnic lines, political parties, rural vs urban vs suburban, young vs old, etc. What happened to that feeling of September 12, 2001? Divided we fall.

I won’t get into deep speculation of why we are so divided. My view is 24/7 news channels, social media, the decline of social capital in our communities, and more is just a small part of the problem.

But I belong to an organization that brings men together of every race, of every religion and from every status of life. We meet in a lodge where you can check all of those differences at the door and enter a sanctuary where every person is absolutely equal with one another. A warm handshake (before COVID), a sincere greeting and a deep sense of caring for each other await you. Of course I am speaking of Freemasonry.

Freemasonry absolutely has the framework that can help solve so many of the world's trevails today. You enter a lodge, engage with other brothers, learning from them, helping them, all the while being on the level with them. You leave the lodge a better person and go back into the greater world and apply those principles we talk about and learn about in our degrees. You are instantly part of the solution instead of part of the problem.

So I challenge all of us as Freemasons to use those lessons and put them to work in your community, at home, in your place of worship, on the job and as you use social media. Be the example and others will soon begin to take notice and your positive influence will rub off on them.

Be a light in the darkness. United we stand.
~GJK
WB Gregory J. Knott is a founding member and Senior Contributor of the Midnight Freemasons blog. He is a Past Master of St. Joseph Lodge No. 970 in St. Joseph (IL) and a plural member of Ogden Lodge No. 754 (IL), Homer Lodge No. 199 (IL) and Naval Lodge No. 4 in Washington, DC. He’s a member of the Scottish Rite, the York Rite, Eastern Star and is the Charter Secretary of the Illini High Twelve Club No. 768 in Champaign-Urbana. He is also a member of ANSAR Shrine (IL) and the Eastern Illinois Council No. 356 Allied Masonic Degrees. Greg serves on the Board of Directors of The Masonic Society and is a member of the Scottish Rite Research Society and The Philathes Society. He is a charter member of a new Illinois Royal Arch Chapter, Admiration Chapter U.D. and serves as its Secretary. Greg is very involved in Boy Scouts—an Eagle Scout himself, he is a member of the National Association of Masonic Scouters. You can contact him at gknott63@gmail.com