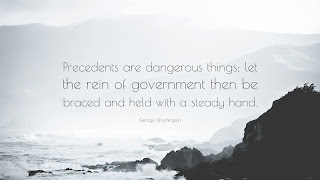 Ask just about anyone who the most famous Freemason is, and you will probably get the answer of George Washington. As the 1st President of the United States, it is an obvious answer. Most Masonic Lodges will have a portrait of Brother George somewhere in their lodge. He set many Presidential precedents that are still followed to this day, most notably only serving two four-year terms. The 20th Degree in the Scottish Rite is called Master Ad Vitam or what we like to call in the Northern Masonic Jurisdiction (NMJ), the George Washington Degree. The only thing that is the same in the 20th Degree between the NMJ and the Southern Jurisdiction (SJ) is the name of the degree. Master Ad Vitam means Master For Life. George Washington could have been ‘Master For Life’ for the United States if he wanted to be, but he chose a different path. He did what he thought was in the best interest of the country. Can you say the same thing about the precedents you are setting in your lodge?

Officers in a Masonic Lodge set precedents every year whether you know it or not. The precedents you set will either be for the better or for the worse for your lodge. For the purpose of this article, we will use Marriam-Webster’s definition as defined here: 2a: something done or said that may serve as an example or rule to authorize or justify a subsequent act of the same or an analogous kind.

As Master of the lodge, are you shifting responsibilities and powers to the secretary? As Senior Warden, are you preparing for the new year or waiting until you are installed as Master? As Junior Warden, are you making meals members want to come to or are you throwing something together that is quick and easy? As an outgoing Master, are you disappearing, never to be seen again? Every action sets a new precedent for your successor in line. A Grand Lecturer was just explaining to the lodge last meeting that if you learn the ritual wrong initially, it's very hard to re-learn the ritual correctly. This is the same with precedents. When bad precedents get set, they are very hard to overturn, and it leads to the one phrase we all love to complain about ‘that’s not how we did it in my year.’ Precedents are set at every level starting at what we expect out of our candidates all the way up to the Grand Master and his edicts.

We should always be looking at successful lodges and organizations to borrow their ideas, traditions, and precedents. Be such a leader that when you are done with your term, it sets a new standard for your lodge to follow for many years to come. Other times, the best way to lead is to step aside and let the new leaders take reign just as Brother George did. If you have not had the chance to see the George Washington Degree, please do so, it is one of the favorites in the NMJ.

WB Christopher J. Hathaway was raised in Catlin Masonic Lodge #285 and is the current Worshipful Master of Bloomington Masonic Lodge #43. He belongs to the Valley of Danville, AASR where he is the Most Wise Master of the George E. Burow Chapter of Rose Croix and Membership Chairman. Other appendant bodies include the Gao Grotto, Mohammed Shriners, and the Illinois Lodge of Research. Outside of the lodge, he enjoys spending time with his wife Taylor and cheering on the Fighting Illini and Chicago Cubs.