Yggdrasil: Another Archetype for the Tree of Life 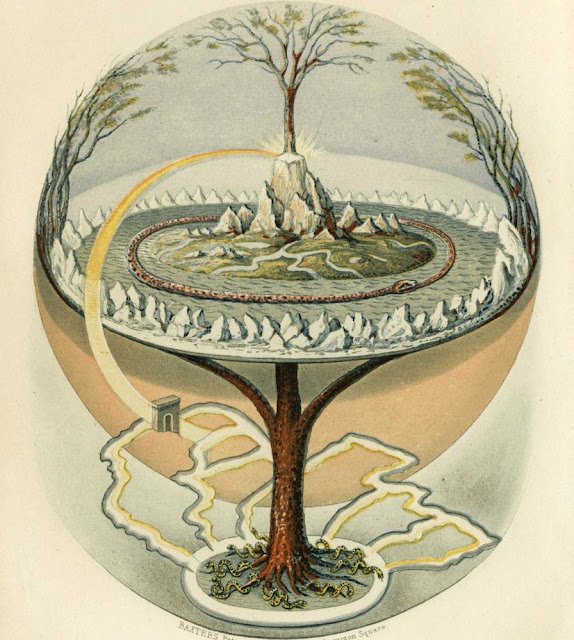 When I became a Master Mason, I received a booklet that outlined elements of the degree and it also suggested certain paths of study. Those paths of study were recommended so that I could understand the full import of the Masonic philosophy contained within my degrees. One of those concepts was Kabbalah.
One of the first concepts you learn about in a basic book on Kabbalah (if you can consider any part of Kabbalah to be basic) is the Tree of Life. This concept in Kabbalah was interesting to me. The way it separated virtues and archetypes for me was not unlike Platonic and Neo-Platonic ideas.
We often look at symbols in religious rites, mythologies, and degrees as archetypes--that is, a thing which appears in another story, culture, or tale but that has the same attributes. E.g. Thoth and Hermes. The Tree of Life is one of those symbols. It's all over the place in the world's religions, and I find it fascinating.
One such version (if you want to call it that) is Yggdrasil, the Norse version. See the Mackeys Masonic Encyclopedia entry below.

Yggdrasil. The name given in Scandinavian mythology to the greatest and most sacred of all trees, which Was conceived as binding together heaven, earth, and hell. It is an ash, whose branches spread over all the world, and reach above the heavens. It sends out three roots in as many different directions: one to the gods in heaven, another to the Frost-giants, the third to the under-world. Under each root springs a wonderful fountain, endowed with marvelous virtues. From the tree, itself springs a honey-dew. The serpent, NithhOggr, lies at the under-world fountain and gnaws the root of Yggdrasil; the squirrel, Ratatoskr, runs up and down and tries to breed strife between the serpent and the eagle, which sits aloft. Dr. Oliver (Signs and Symbols, p. 155) considers it to have been the Theological Ladder of the Gothic mysteries.

Other versions of the Tree of Life exist in; Ancient Mesopotamia, Ancient Iran, within the Baháʼí Faith, Buddhism, Chinese Mythology, Christianity, Manichaeism, Meso-America, Turkik, Hinduism, and more. Could so many traditions get it wrong? Was there a literal tree? In any case, I hope you find this interesting and that it sparks an interest in you to go digging.