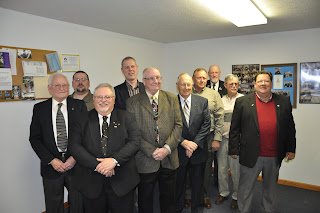 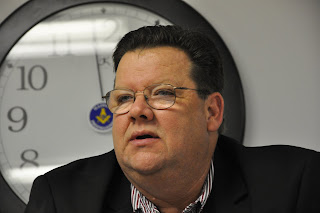 Current Worshipful Master of Ogden Lodge Tim Nichols opens the after dinner program.
Ogden Lodge held a very successful Past Master's Dinner on Sunday.  We had a great dinner provided by Bro. Doug Behrens (I know my friends at Pekin Lodge know this, but it's a great thing for a lodge when they manage to raise a great cook in their lodge).  We had ten Past Master's of Ogden Lodge in attendance, and several more for other area lodges. 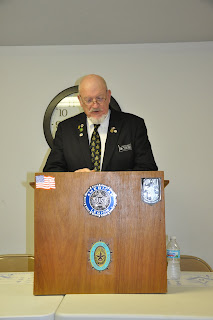 Bro. Secretary (ADDGM) Denver Phelps reads the names of the Past Masters in attendance.
Brother Denver Phelps announced the names of our Past Masters while our current Master, Tim Nichols, passed out roses to their wives.  I gave a short talk about the history of the lodge, and American history since the lodge was founded.  Bro. Greg Knott managed to record the whole thing and put it on YouTube.  I thought he was kidding.  I wish I'd practiced more now. 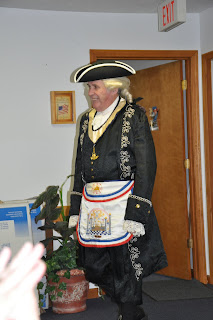 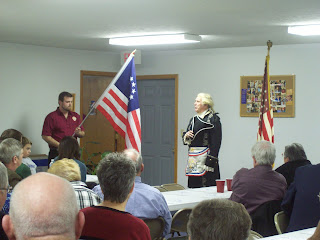 General Washington and his slackey Sean McBride
Of course, the only thing anyone is going to remember about the event was the surprise visit from Bro. George Washington.  He gave a riveting account of his life, the Revolutionary War, and his Masonic affliation. It was a memorable talk punctuated by the presentation of the American flag--according to legend, General Washington presented the first flag to a Masonic Lodge, and to this day, you'll find one in every Masonic Lodge in the United States, and every meeting begins with the pledge.

Good time was had by all.