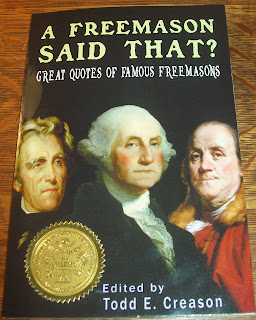 Grand Lodge Special Edition of A Freemason Said That?
featuring the official Grand Lodge of Illinois Seal
Towards the end of October, I was asked to speak at a Past Master's Dinner in Mattoon, and was fortunate enough to have dinner with the Grand Master of Illinois, Richard L. Swaney.  It was the same day my quote book A Freemason Said That?  Great Quotes of Famous Freemasons was released, and I brought the only copy I had along to show to people as I hawked books in the lobby afterwards.  Grand Master Swaney told me he was a fan of great quotes, he liked my book, and loved the cover.  I sent him home with the book, and later we got talking about doing a special edition just for the Grand Lodge of Illinois.  Four months later, it's a reality!

This will indeed be a very rare book--there are a very limited number.  It features the Grand Lodge Gold Seal on the cover, the autograph of Grand Master Swaney on the title page (and mine too on the second title page).  Grand Master Swaney also wrote a brief preface for the special edition.  But the only place this book is available is from Grand Master Swaney himself.  He intends to use these as presentation gifts during his travels.
It was a great priviledge to be asked to do this, and I'm certainly proud of the finished product.