The World Looks A Lot Different To A Mason 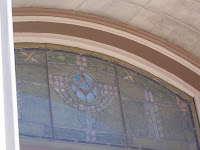 Last August, on a beautiful afternoon, I decided to take the day off and enjoy it. It was a nice day to take a long drive, but I didn’t have any errands to run, so I decided to drive around a photograph as many Masonic symbols as I could find in an afternoon. I drove over two-hundred miles, and took over a hundred pictures. I knew where to find some of the symbols I wanted to photograph, but others I stumbled upon completely by accident.  Photo right: window detail, Danville Masonic Temple, Danville, IL 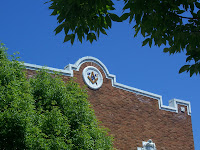 It’s amazing how much different the world looks after you become a Mason—you can’t really go anywhere without seeing the signs of Freemasonry everywhere. It’s been said that a Mason can see a ring or a pin at a hundred yards. I believe it.  I know I can.  Every time I drive through a small town, I look up to the second story on Main Street, and more often than not, there will be a Masonic Lodge there. Photo left: St. Joseph Lodge No. 970, St. Joseph, IL 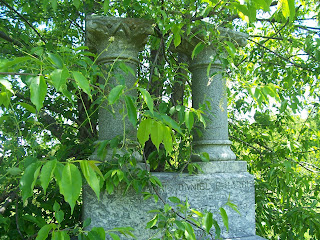 The symbols are everywhere in cemeteries—old stones and new. You’ll find the square & compass symbol often as you’re walking.  Those are nearly impossible to miss, but sometimes those cemetery stones are engraved very subtly—only another Mason would recognize it for what it is.  This one is a good example of that--I found this in an overgrown area of a local cemetery.  I nearly missed that this man was a Mason.  The globes at the tops of the columns are gone now and only the iron posts remain, but if you look closely at the top of the left column . . . pretty subtle huh? 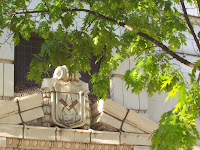 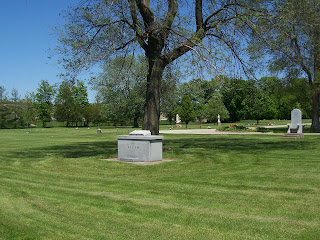 This is a beautiful granite Masonic alter in a cemetery in North Danville.   You can also see the Master's chair in the East.  There are also officer's stations in the West, and South.  This enormous lodge room in granite is surrounded by the graves of Master Masons.
It was a fun exercise, and a great way to get a little exercise on a beautiful afternoon. Try it sometime!  Send me your pictures, and I'll put them up.
A Few More Photos . . . 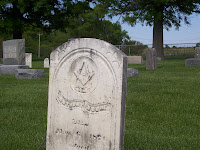 Found in Stearn's Cemetery, Fithian, IL
If you click and enlarge this one, some of you
may note he wasn't just a Freemason.  Anybody
know what else he was? 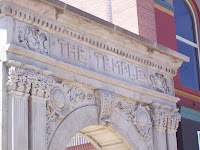 The Temple Arch of the original Scottish Rite Temple
at the entrance of a corner park in downtown Danville, IL. 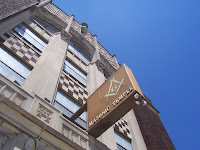 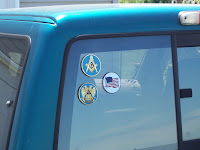 Any Mason would know the owner of
this truck is a Master Mason, a 32nd
Degree Mason, and a patriotic American.
I know it because it's my truck.