Library Archives of Ogden Past Master Lost in Tragic Blaze! 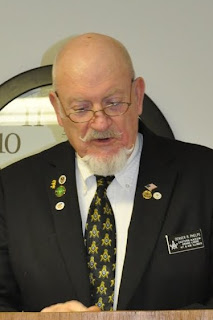 Secretary and ADDGM Wor. Bro. Denver Phelps makes the sad announcement . . .
As I reported earlier, Ogden held a Past Master's Dinner to thank the PM's of Ogden Lodge for their past service and to celebrate the long history of the lodge.  It was an event of laughter and celebration, but it was obvious to some that two things were out of wack...  first of all, one of the more recent Past Masters of Ogden Lodge, and current Master of Homer Lodge, Steve Hooper was missing.  Secondly, the Secretary of the Lodge, Denver Phelps, seemed to be carrying a dark secret, the details of which would soon be announced.

After a delicious dinner, and a presentation in which all the PM's of Ogden were announced and their ladies were presented with roses, Worshipful Bro. Denver Phelps confirmed what most of us had sensed--there was sad news to be announced. . .

He said, and I quote to the best of my recollection:

"I don't know if you all knew it, but there was a bad fire in Royal last night.  Some of you may have noticed that Worshipful Brother Steve Hooper isn't here today.  He had a bad fire at his house last night . . . in his library.  He lost all his books.  All three of them.  Two of them he hadn't even colored in yet. . ."

Of course Worshipful Brother Hooper was actually vacationing in Florida, and there was no fire at his house, but it hasn't stopped his dedicated friends and brothers from taking up a collection of coloring books and crayons.  If you'd like to donate, just mail those coloring books to Ogden Lodge, and we'll make sure he gets them--we're running a little heavy on Disney, so SpongeBob or Scooby-Do would be good choices.  We know it's expensive at nearly $5, but we're also trying to raise money for a 64-color box of Crayola crayons with the sharpener in the back.

Of course, one lesson that Masons can take away from this. . . well, practical joke . . . is that if you miss a meeting, a pancake breakfast, a dinner, or a degree... you open yourself up for all kinds of mischief.