You're One Of Those Freemasons . . . I Never Knew! 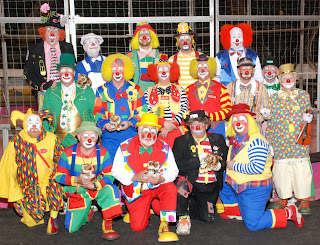 Well nobody should be surprised to learn that somebody they know has been keeping a secret--the secret that they are a Freemason.  It is, afterall, an ancient and secretive society, and over hundreds of years Masons have learned to be very subtle.  We blend in, invisible to all but other Masons, who are able to decipher the ingenious hidden signs.  It is indeed a sharp  non-Mason that manages to recognize one of these nearly invisible clues that someone they know may be a Freemason.  It would be a nearly impossible feat for the uninitiated to pick one of us out of a crowd without knowing the hidden mysteries.  We're like the wind--there but completely invisible. 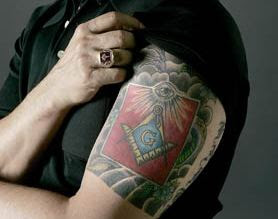 You have to look sharp . . . it's easy to miss the ring.  The hat.  The lapel pin.  The belt buckle.  The coffee mug.  The square and compass tie (with matching tie clip, cufflinks, and Past Master's watch).  The six emblems on his car, the license plate frame, and the tail light emblems--and in most states the license plate itself.  The apron case in the backseat of his car is no clue either.  Or the clown wig hanging on his coat rack. Nor can the untrained eye get much of a clue from his computer screensaver, the mousepad, the pen he's using that commerated his lodge's 100th anniversary, or his 2B1ASK1 keychain.  And what's up with all the pictures of him wearing a red, green, or purple jacket?  Was he an extra in that Batman movie?  One of Joker's henchmen maybe?

We're definitely subtle, elusive, and secretive individuals, huh?  It should be pretty obvious that we're enthusiastic about our fraternity.  We do a lot of good things in the world, and we're proud of being a part of it.  Masons in America donate more than a million dollars a day to charities--the majority of which are children's charities.  The Shriner's Hospitals and the Scottish Rite Learning Centers are two good examples. 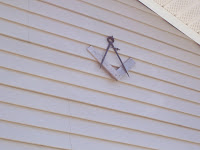 There is no other organization quite like the Freemasons.  And those symbols are on everything.  Over the last five years, I've put together a large collection of antique Masonic memorabilia.  Everything from books and artwork, to York Rite chapter pennies and Masonic jewelry.  I even have a Past Masters whiskey decanter.  Bookends, pens, hats, commemorative coins, letter openers.  Just name it.  In fact, I've often wondered if there is anything a Mason won't put a square and compass on.  I know my wife gives me grief at times--especially over putting the Scottish Rite emblem on my riding lawn mower...I had an extra one!  Oh, and there's the square and compass hanging over the garage door, too. 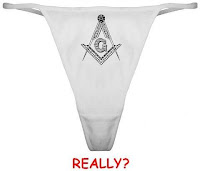 I'll go ahead and apologize for that remark in advance.  I'm sorry (but it's still funny).