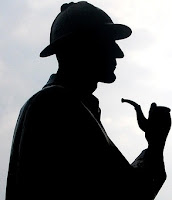 I’d have to admit that one of my favorite writers has always been Sir Arthur Conan Doyle—coincidentally, he was also a Freemason, and if he’d been an American, he would have been one of the first Masons I would have profiled in one of my books. I’ve read and re-read the Sherlock Holmes stories since I was a kid. There are four novels and fifty-six short stories. What you may not know, is that if Doyle had been successful at his chosen profession, we probably wouldn’t have one of the most famous detectives of all time—the world’s first pop icon if you will.
Doyle, a Scotsman, studied to be a doctor at the University of Edinburgh, and then set up a small practice. It was hugely unsuccessful, and it gave him a lot of time to think. And he had a lot of time to write. Much like Sherlock Holmes biographer, it seems like Dr. Doyle, like Dr. Watson, was always working with Sherlock Holmes instead of seeing patients.
A lot of what Doyle wrote about fictionally in his stories have become fact today. He wrote about Sherlock Holmes using fingerprints long before that was actually done. Holmes had a remarkable ability to profile people and could tell a lot about them from their clothing and mannerisms, which is done today too. He was a master at trace evidence as well—studying everything from soil types, to various types of tobacco ash.

Writers still write new Sherlock Holmes stories today, but I haven’t found many I like. I don’t know what it is, but they just aren’t quite right. I’ve always felt maybe it’s just best to leave it alone rather than diminish Doyle’s remarkable work. I did stumble across a couple writers recently that write detective fiction in that same tradition, during that same early-Victorian period London that Doyle wrote about. I particularly like Charles Finch. His first book about detective Charles Lenox, A Beautiful Blue Death, was excellent. His knowledge of early-Victorian London is obvious—he captures that period perfectly. I’m working on his second novel now, The September Society, that is set at Oxford University. It’s kept me up late two nights this week.

Then there are Will Thomas’ novels about Cyrus Barker and his apprentice Thomas Llewelyn. Those books are really different from Doyle’s, but they are a blast to read. There are several novels starting with Some Danger Involved. They are action packed, and quickly paced—they are kind of like Sherlock Holmes meets Indiana Jones if you will. I'd be willing to bet it won’t be long before Barker & Llewelyn find their way to the big screen.