Illustrious? Me? Really? Who Is This? 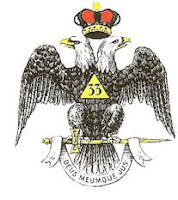 My friends keep asking me why I haven't made the announcement that I've been elected to receive the 33rd and Last Degree of the Ancient Accepted Scottish Rite (NJ) .  Actually, I did amongst a smaller group on Facebook, and I made the announcement during our regularly stated lodge meeting last week.  The truth is, I'm just getting to the point now that I actually believe it myself.  I didn't want too many people to know, so that when the Valley of Danville discovered they'd made a horrible mistake and called the wrong guy, it wouldn't be so embarrassing for me.
It was two weeks ago today that I got the call from Philadelphia from our Valley Active, The Illustrious Brother James L. Tungate, 33°, informing me I'd been elected to receive the 33° in Chicago in 2011.  When I got off the phone, and told Valerie, she sat there for a long time with the same blank look on her face I had on mine.  When she finally spoke, all she had to say was, "you better straighten up, Mister."
It still hasn't completely sunk in yet.  Maybe that's why they give you a year to think about it--maybe it takes that long to get used to the idea.  I've received a flurry of phone calls, text messages, emails, and cards, and each one makes it a little more real to me.  In fact, I haven't looked this forward to going to the mailbox every day, since my "beer of the month club" ran out.
But seriously, I never thought I'd be, nor did I ever expect to be a candidate for consideration.  I've written about many of our famous Illustrious Brothers over the last five years, and I've made friends with many more.  I know the caliber of men that are selected to receive this rare honor.  It is certainly one of the greatest honors I've ever received.
I'll bet I've said this a hundred times over the last five years--but most of us feel we can never put back into Freemasonry what we take out of it.  I've come a long way, but I'm just getting warmed up.  I've got a long way to go yet, and as always, no matter what I decide to do after I complete the Famous American Freemasons series, I expect they'll be a lot of good Masons that will help me get there.  I'm truly blessed by the friends I've made in life.  Thank you so much.
And I will try and straighten up . . .