Welcome to the Valley of Danville 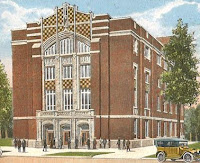 The Scottish Rite got its start in Danville back in 1904, when a Lodge of Perfection was established there.  This beatiful old building is the Scottish Rite Temple in Danville.  It looks the same today as it did when this rendering was done.  This wasn't the original building however.  This building came later and was consecrated in 1917.  The original building was two blocks east of this one, and it no longer exists, but the entry arch of that building still stands at the edge of the park that now occupies that corner of downtown Danville.  Not only home of the Scottish Rite Valley of Danville, the temple is also the home of three lodges, Olive Branch No. 38, Further Light No. 1130, and Anchor Lodge No. 980.  One of Danville's most famous citizens, Uncle Joe Cannon was a member of Olive Branch lodge. 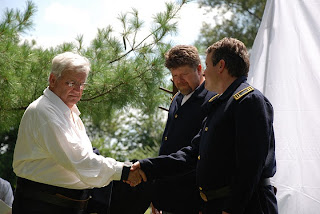 For more than a hundred years, The Valley of Danville has been known for its innovative ideas, important charitable work, and for the excellence of their degree work.  For example, the Valley of Danville was the first valley to stage the new 26th Degree (The Civil War Degree).  And in 2008, the Valley of Danville also opened a Learning Center for Children which provides, free of charge, one-on-one instruction to children with dyslexia in Eastern Illinois.
﻿﻿
﻿﻿
﻿﻿﻿﻿And in addition to all the things Scottish Rite Masons do in our Valley, the Danville Temple is also a remarkably beautiful building.  From its mammoth second floor lounge, to the beautiful theater on the third floor, it's adorned with rich woodwork and moldings, stained glass windows, and unique murals.  If you're a Scottish Rite Mason and would like to visit The Valley of Danville, our next reunion is coming up November 12th and 13th.
﻿
﻿