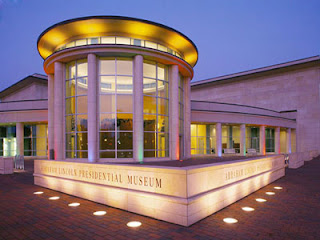 If you live in Illinois, and are looking for a great place to take a day trip (especially on a rainy Sunday in February), check out the Abraham Lincoln Presidential Library and Museum in Springfield.  We had a great time there on Sunday, and I was a little concerned our four-year-old wouldn't get much out of it, but she had a blast.
This isn't like any other museum I've been too.  It's very interactive.  There are the more traditional displays, and scenes from Lincoln's life depicted with wax models.  But there are other ways the museum has found to take visitors back to Lincoln's age.  I particularly enjoyed the whispering hallway.  Lincoln wasn't popular with many, and as you pass down this corridor with the walls covered with political cartoons of the day, you hear what many people were whispering about Lincoln during his time. 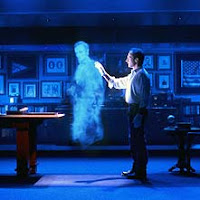 The ghosts in the library presentation was excellent too--a lesson in history taught in part by holographic ghosts from the past.  Katie liked that.  She also enjoyed the thunderous presentation in the Union Theater "Lincoln's Eye's" which included rumbling seat, lightning, exploding cannons, and the smell of gunsmoke.

There's a lot of history in Springfield, and a lot to see at the Lincoln Museum and many other sites in and around Springfield--the Old Capital Building, Lincoln's Home, Lincoln's Tomb, Law Office, etc.
I've visited Springfield many times (at least twice a year), but I think the last time I took a look around as a tourist before Sunday, was back when I was a Cub Scout.
It's worth a trip.
TEC

Email ThisBlogThis!Share to TwitterShare to FacebookShare to Pinterest
Labels: Article