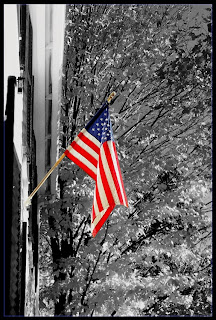 Now I think almost everyone knows that the lyrics to "The Star Spangled Banner" come from a poem "In Defence of Fort McHenry" written by Francis Scott Key in 1814 to record the events he witnessed from aboard a British ship as the British Navy bombarded the fort.

What's interesting is where the melody came from.  It was a popular British drinking song written by John Stafford Smith for the Anacreonic Society.  The tune was already well known and popular in America with several different versions of the lyrics in circulation, and Francis Scott Key's poem was adapted to the already well known melody.
"The Star Spangled Banner" was officially recognized for use use by the Navy in 1886.  President Woodrow Wilson first suggested it be made the National Athem in 1916, but it wasn't adopted until 1931 when the measure was passed by an act of Congress.
And there you have it--how a British drinking song came to be America's National Anthem.
Another thing you may not be aware of . . . there are three more verses!  And famous poet Oliver Wendell Holmes wrote another verse during the Civil War that appeared in popular songbooks at the time.

And where is that band who so vauntingly swore
That the havoc of war and the battle’s confusion,
A home and a country, should leave us no more?
Their blood has washed out their foul footsteps’ pollution.
No refuge could save the hireling and slave
From the terror of flight, or the gloom of the grave:
And the star-spangled banner in triumph doth wave,
O’er the land of the free and the home of the brave.

O! thus be it ever, when freemen shall stand
Between their loved home and the war’s desolation.
Blest with vict’ry and peace, may the Heav’n rescued land
Praise the Power that hath made and preserved us a nation!
Then conquer we must, when our cause it is just,
And this be our motto: “In God is our trust;”
And the star-spangled banner in triumph shall wave
O’er the land of the free and the home of the brave!

When our land is illumined with liberty's smile,
If a foe from within strikes a blow at her glory,
Down, down with the traitor that tries to defile
The flag of the stars, and the page of her story!
By the millions unchained,
Who their birthright have gained
We will keep her bright blazon forever unstained;
And the star-spangled banner in triumph shall wave,
While the land of the free is the home of the brave.