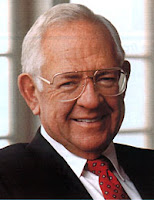 "The harder you work, the more luck you have."
~Dave Thomas
Sol. D. Bayless Lodge No 359, Fort Wayne, Indiana
﻿As you go back to work on Monday, remember something that Dave Thomas knew--you make your own luck in this life.  You get out what you put in, and the greatest rewards are the ones you work hard for.
We've all heard people say it about someone before.  "He's had all the breaks."  "He's lucky."  "Things seem to come easy for that guy."  But I'd be willing to bet if you took a close look, that guy hasn't had all the breaks, he's not been particularly lucky, and things didn't come to him near as easily as you might think.  The reason it might look that way may be because of his attitude towards life.  He's probably the kind of person that isn't easily rattled by life's challenges.  The kind of person that isn't afraid to roll up his sleeves and take on a problem no matter how large.  He doesn't avoid making a big decision, and isn't afraid to take a chance.  That's why he's more successful than those that would attribute "luck" rather than his actions as the reason.
After studying and writing about so many remarkable men, one thing seems common to them all.  It is the way they faced challenges.  They tackled them head on.  They went through them rather than around them.  The larger the challenge, the more determined they were to succeed.  And the things they managed to do are amazing.  They saw the potentional of the reward rather than worry about the risk of failure.  Most of those men knew instinctively that nothing was beyond their reach with enough hard work and determination--and that's why we still know their names today.
In other words--no guts, no glory.
~TEC