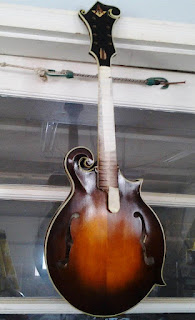 Now that the stain was as Joe had envisioned it, I figured we were close to being done. Not hardly. Next came four coats of sealer and three pictures that occupied most of my day. Work? Nah. I just stared. Then came the last coats of sealer, with more staring.

There had been sanding in between, apparently, but I was just staring at the finished product. Did I say “finished?” No, because then came the first four coats of lacquer. More staring. By this point, Todd Creason was staring too, and letting me know about it. “Maybe I should have picked another instrument,” he said. “I wonder if he builds pianos?” 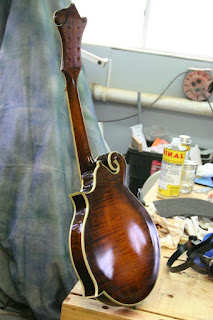 My cousin Tom commented that he admired my patience. “You know this would have me chewing my foot off,” he said. No time for chewing. I was too busy staring. I had the feeling I would do that a lot until I could actually play the thing. It was just too pretty to ignore. The Master Mason’s Mandolin was taking shape before my eyes, at least on Joe’s Facebook page. 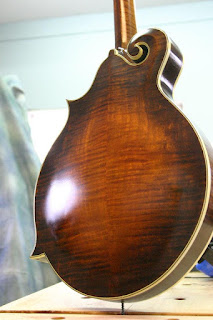 With every coat of lacquer, the colors deepened and the wood grain shone. I kept looking at the pictures he posted, and wondered if Joe was as stunned as I was. So I asked him. Now, Joe tends to judge himself harshly, and I had never heard him say anything that might be called bragging, but when I talked with him he said, “Mike, there are some flaws in this mandolin, but every time I look at the back of it in some light I just smile a lot.” “Me too, Brother,” I said, “me too.”

This is the tenth installment in Michael Shirley's Mandolin Series.  To be continued...

Michael H. Shirley is Past Master of Tuscola Lodge No. 332 and Leadership Development Chairman for the Grand Lodge of Illinois. He's also a member of the Illinois Lodge of Research, the Scottish Rite, the York Rite, Eastern Star, and the Tall Cedars of Lebanon. He's also a member of the newly-chartered, Illini High Twelve No. 768 in Urbana-Champaign. The author of several articles on British history, he teaches at Eastern Illinois University.