Fred Flintstone: Freemason Or Not?

Between 1960 and 1966, The Flintstones was one of the most popular shows on television. It was the first prime-time animated show to last more than two seasons--a record that wasn't broken until The Simpsons hit the airwaves. Believed to be based on the popular television show The Honeymooners (a fact confirmed by one of the show creators William Hanna, and denied by the other creator William Barbera) Fred and Wilma Flintstone, and Barney and Betty Rubble entertained American families each week with those little problems that confronted the "modern stone-age family."  And over the years, we watched as their families grew--who can forget Pebbles and Bamm-Bamm?

Pebbles arrived towards the end of the third season, but it was only a matter of time before that happened.  Did you know that Fred and Wilma were the first husband and wife to appear on American television in the same bed?  And The Flintstones was airing during the same period that Rob and Laura Petrie were still in twin beds on The Dick Van Dyke Show.

There were a lot of little things that fans of the show noticed--like the fact the furniture in the Flintstone home was seldom the same from week to week (Fred was obviously a very good provider, I mean seriously, even back then, imagine how much a dishwasher powered by a Woolly Mammoth would cost).  The fact that the show originally aired in black and white.  And when it went to color, sharp eyes quickly noticed the fact that the family pet, Dino, while most often purple, would often appear green, or even brown (probably a reptilian camouflage trait).  Dino's ability to blend into his environment may be the way he managed to stalk and tackle Fred Flintstone every episode.  That's just a guess.  I'm giving Fred the benefit of the doubt.  You'd have to be a neanderthal to be tackled like that again and again.  Oh wait... never mind. 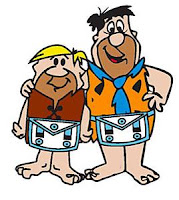 But there is one myth that even the most knowledgeable show fans have argued about for over five decades now.

Was Fred Flintstone a Freemason?

It wasn't easy, but after exhaustive research, I believe I'm finally able to definitively answer that question.  Yes, he was.  Fred Flintstone and Barney Rubble were both members of Water Buffalo Lodge No. 26 in Bedrock A.M. (Ancient Freemasons).


Masonry was in its infancy (as should be obvious by the crude construction of the lodge), and remember, this was centuries before the invention of pancakes, so bowling was most likely their means of raising money for charity.  They had regular meetings, wore strange hats, and it was men only--should be obvious.  The secret passwords, handshakes and ritual have been long lost to history, but my research suggests that the word "Yabba-dabba-doo" may have had some Masonic ritual significance during that pre-historic era of Masonry.

So now you know--just don't quote me.


In closing, there was at least one very famous Freemason involved in The Flintstones--The Man of 1,000 Voices.  Brother Mel Blanc voiced Barney Rubble.  I tell his story in Famous American Freemasons: Volume II, including how he continued to work on The Flintstones from a hospital bed after surviving a near-fatal car accident.