"When all is said and done, the real citadel of strength of any community is in the hearts and minds and desires of those who dwell there."

There are a lot of festivals in Illinois…we have your Morton Pumpkin festival, Sugar Creek and Arts festival, Sweet Corn Blues Festival, Art & Balloon Festival, but the one festival that is celebrated in honor of Senator Everett Dirksen is the Marigold Festival. (http://en.wikipedia.org/wiki/Everett_Dirksen) Senator Dirksen was a member of Pekin Lodge #29 and a 33º Mason as well. Senator Dirksen loved marigolds so for the past 40 years, Pekin has had this festival. Crafts, food, entertainment, celebrities, parade, Medallion hunt and did I say food! This year’s celebrity was Cindy Williams (AKA Shirley from the 70’s sitcom-LaVerne and Shirley) 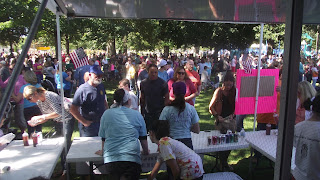 The citizens of Pekin work together as a community and we pray for no rain. Unfortunately Friday night family fest had to be postponed to a later date (rain). From what the Pekin Daily Times said, this was the biggest and best festival we have had in years. Bethel 55 Job’s Daughters can attest to that. They sold pulled pork sandwiches, ribs, tips,(smoked all night long) homemade shortcakes with either strawberries or peaches and assorted soda’s and water. Did this make your mouth water? I told them if we had a successful weekend, they could perform cartwheels…as you can see from the cartwheels, it was a successful weekend. 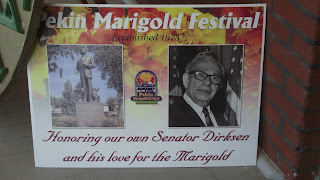 Every year the citizens of Pekin look forward to this weekend, not only to honor Senator Dirksen, but to meet up with friends, family, food and fellowship. If you have never come to Pekin for the Marigold festival, please do. It’s always the first weekend AFTER Labor Day. We will see you next year!

Judy Gordon is very active in Job's Daughters. She's the Past Honored Queen, and Bethel Guardian of Bethel No. 55, Pekin (IL). She received the Cryptic Masons Masonic Youth Leadership Award along with her husband, Ray Gordon in July 2007. She's also Past Matron of the Morton Chapter No. 974 (IL) of the Order of the Eastern Star and Historian of the Emblem Club No. 424 of Pekin (IL) Judy is the recipient of the Degree of Royal Purple (2012) and elected as the Grand Marshal for Illinois Job's Daughters (2015-16). Ray and Judy have three grandkids, and a very spoiled dog, Reggie (who incidentally volunteers as a Therapy Dog at local hospitals and nursing homes.)