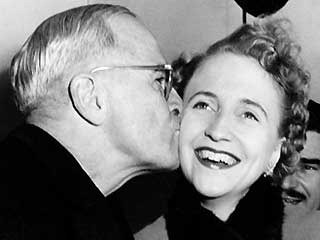 "The best way to give advice to your children is to find out what they want and then advise them to do it."

That's really good advice, and it's not always easy advice to follow.  You always believe you know what's best for your kids, and when they are young--you do.  As they grow, you try and steer them onto that correct path in life.  But there comes a day when you realize that your influence is beginning to wane.  Harry must have known that, and realized it was much better for a father to be a fan, rather than a critic.

I'm sure it wasn't Harry's first choice for his daughter Margaret to pursue a career as a singer, but he supported her, and in 1947, when a music critic harshly criticized one of Margaret's first music performances on the radio, Harry had a little something to say about it in a note he sent him.  "Some day I hope to meet you. When that happens you'll need a new nose, a lot of beefsteak for black eyes, and perhaps a supporter below!"

And it all worked out.  Margaret has had a fine career.  She's not only a wife and mother, but she had a long career in radio, as both entertainer and journalist--in fact, she was paired with Mike Wallace.  She's also a historian and novelist.