﻿﻿I’m not sure about other musicians, but I want an instrument that appeals to the eye as well as the ear, so the color and visual tone of the Master Mason’s Mandolin mattered a lot to me. Fortunately, it mattered to Joe too. We both like the look of old wood, and we both wanted the mandolin to have a vintage look, so a stain with wood tones was the logical choice.
﻿﻿ 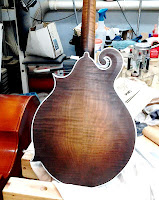 Apparently, he needed to put that on and then wipe off most of it so that the gradations in tone would work. Who knew?  The black didn’t last long, and the first pictures of the stain he posted after that looked great. But Joe had a picture in his head and the color didn’t quite conform to that vision.

So he removed the stain and started over. The pictures he posted when he was done had the caption, “Finally got it where I want it.” Me, I was too amazed to be able to use words. All I could do was stare. I didn’t know then that I’d have to get used to staring. A lot.

This is the ninth installment of Michael Shirley's Mandolin Series.  To be continued . . .