I found a metal file box while I was rummaging through a closet recently.  When I opened it, I discovered a treasure-trove of things my parents had saved.  Among the items were World War II ration books.  I'm certain they belonged to my mother, because at the time my father was slogging his way across North Africa, up through Italy and into France.  You've seen the maps.  My parents, Robert and Alice, were part of that industrious, young and determined group that really did save the world; and for good reason we now call them "The Greatest Generation."

People of that era made sacrifices unimaginable to most of us, now living in what Time Magazine has dubbed the "Me Me Me Generation" — not to be outdone by the "Me Generation" of the 70s.  Duuude, only having one "Me" to define your generation would be lame. 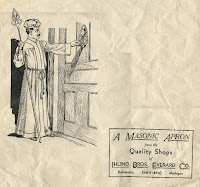 I'm not sure what all of Mom's coupons were for, but I know for sure the U.S. rationed gas, food and other items.  People were encouraged to recycle tin cans for the war effort.  Children even donated their metal toys to help.  Each family was allotted five tires (for one family car), and had to give any others to the government.  Even the fact that we are at war today does not affect us like that.  Most of us, apart from families with loved ones in the military, may make some sacrifices but not on such a large scale.

The material shortages ran so deep that it even affected, at least in one small way, the Freemasons.  When Dad returned from the War, he joined the Fraternity.  Although peacetime had returned, production had not caught up with demand and certain things remained hard to get.  In Dad's Lodge and many others, it was customary to present a new Brother his apron in a cellophane envelope, suitable for its protection.  Cellophane, however, was in short supply and his Lodge had to use paper as a substitute.

When Dad passed away, I could not find his apron.  His Lodge, as is the custom, supplied one at his funeral.  Later, while going through some of his things, I found it in an old cedar chest, inside that well-worn paper envelope.  Despite its wrinkles and tears, it had protected the apron all those years.  On it is a drawing of a Steward knocking at the inner door on behalf of a poor, blind candidate.  Along with the picture is this accompanying note:

Our fighting men need cellophane and its ingredients.  For that reason the protection cellophane formerly gave our Masonic aprons has to be eliminated.

This white paper stock will carry on for the duration.

That envelope, having done its job, now hangs framed on my office wall.  Someday it may reside in our Masonic Museum or Library, a symbol of one of the small sacrifices of a great generation.


~SLH
Steve Harrison, 32° KCCH, is a Past Master of Liberty Lodge #31, Liberty, Missouri.  He is the editor of the Missouri Freemason magazine, author of the book Freemasonry Crosses the Mississippi, a Fellow of the Missouri Lodge of Research and also its Senior Warden.  He is a dual member of Kearney Lodge #311, St. Joseph Missouri Valley of the Scottish Rite, Liberty York Rite, Moila Shrine and is a member of the DeMolay Legion of Honor.