by Midnight Freemason Contributor
WB Gregory J. Knott
﻿
One of the great things about living in a small town is that you know a lot of people and when it
comes time for a community parade everyone comes out to watch.  St. Joseph Lodge No. 970 recently had an entry in the St. Joseph, Illinois community parade.  Our WM Todd R. Hitt put together the float and I was able to use one of my antique tractors to pull it. It doesn’t get much better for me than getting to drive one of my tractors, pulling our lodge float with lots of brethren and Scouts from my Webelos Den on board.
So why bother to be in a parade?  Well when we came back to the lodge at the conclusion of the parade, we were approached by a young man who had also been in the parade and was unloading for his business.  He came up to us and I could tell he was curious about who we were.  Myself and others introduced ourselves to him and we soon found he had been interested in joining our Lodge for some time, but wasn’t sure who to make contact with. 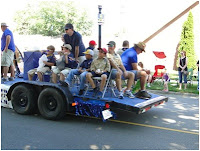 WB Hitt gave him a tour of our lodge and spoke with him about what our lodge does and he came out with a petition in hand.  The perspective candidate was very excited and promised to be back in touch with the completion of his petition.


It just goes to show that you never know where your next new brother may come from.  Being actively involved in your community is one sure way to spark some interest in your lodge.

P.S. for you tractor buffs, I was driving a 1949 McCormick-Deering O-4 orchard tractor.  This tractor is a fairly rare model and spent its working life in the orchards of the University of Illinois.  I acquired the tractor a few years ago and its now mostly on parade duty.