So, I found myself browsing Mackey's Masonic encyclopedia as I often do when I am looking for something interesting to research, when I came across an entry titled "Tyrian Freemasons". I immediately stopped to read the entry because I was intrigued by a couple words I saw in the paragraph, namely;  Dionysian and Solomon's Temple.

So who were they? In short they are said to have been Freemasons who were Phoenician, from Tyre and members of a group called "The Society of Dionysian Artificers". The story goes that Hiram King of Tyre sent these Freemasons to help King Solomon build the Temple. These Tyrian Freemasons were masters in both operative and speculative masonry.

According to this entry, the Freemasons in Jerusalem and those working on Solomon's Temple, were only masters in speculative Masonry having learned what they knew from Noah. Eventually these Tyrian Freemasons combined a system of operative and speculative both, which lasted for centuries. 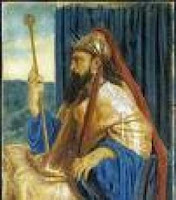 Whether true or not, I thought it was an interesting idea. Especially if you followed Bro. James E. Fry's series recently called "Son's of the East", where he dove into some of the interesting facets of the Phoenician designs used in the building of the Temple.

Bro. Robert Johnson, 32° is the editor of the Midnight Freemasons blog.  He is a Freemason out of the First North-East District of Illinois. He belongs to Waukegan Lodge No. 78. He is also a member of the York Rite bodies Royal Arch, Cryptic Council and Knights Templar, and a member of the Scottish Rite Valley of Chicago.  Brother Johnson currently produces and hosts a weekly Podcast (internet radio program) Whence Came You? which focuses on topics relating to Freemasonry. In addition, he produces video shorts focusing on driving interest in the Fraternity and writes original Masonic papers from time to time. He is a husband and father of three. He works full time in the safety industry and is also a photographer on the side as well as an avid home brewer. He is also working on two books, one is of a Masonic nature.