So if you recall, some time ago I wrote a post about my adventures in building a Lego Masonic Lodge room in which I used the Lego CAD program and I also, using my sons toys, built a Worshipful Master out of his existing pieces. It still stands on a shelf in my office.

Well the other day I took my three sons to see a movie and as usual there were previews for new coming attractions. One of which was the official Lego Movie, and the main character's name is Emmet. My son's name, the one into Legos is also named Emmett. The difference being just the last "T" in his name.

To see my son Emmett watch a main character on screen share his name and in a movie about something he is so passionate about, well he about jumped for joy while in the theatre. There is a scene in the trailer which caught my eye, and maybe I'm just being a crazy person here but let me set the scene-

Morgan Freeman (a wizard) starts to talk to the main character in this large hall and he says "My fellow Master Builders..." then he goes on to name some of the other Lego men, most of which being Legos representation of several pop culture personas. As the screen pans across, and you can catch if you're quick enough - there is a strange Lego man in the background, in fact the only one sitting on a thrown or chair, wearing a top-hat and holding a gavel. I took the liberty of grabbing some screen shots. 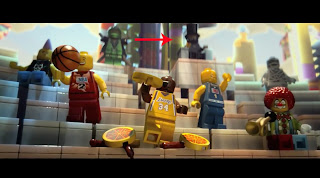 Have a look for yourselves. Perhaps someone involved with the film was a Freemason and decided to throw that in there or perhaps someone was just having fun, much like I was when I built the Lego Lodge. Happy building!


Bro. Robert Johnson, 32° is the editor of the Midnight Freemasons blog. He is a Freemason out of the First North-East District of Illinois. He belongs to Waukegan Lodge No. 78. He is also a member of the York Rite bodies Royal Arch, Cryptic Council and Knights Templar, and a member of the Scottish Rite Valley of Chicago. Brother Johnson currently produces and hosts a weekly Podcast (internet radio program) Whence Came You? which focuses on topics relating to Freemasonry. In addition, he produces video shorts focusing on driving interest in the Fraternity and writes original Masonic papers from time to time. He is a husband and father of three. He works full time in the safety industry and is also a photographer on the side as well as an avid home brewer. He is also working on two books, one is of a Masonic nature.